Etienne and Ivy-Victoria
Sheryl Lee Ralph is an American actress and singer. She is well known for her roles as  she starred as Dee Mitchell in Moesha and as Maggie Turner in Instant Mom.

For Disney, she provided the speaking voice of Rita in Disney's 1988 animated feature film Oliver & Company. She also played Florence Watson in Sister Act 2: Back in the Habit, Clarice Johnson in Hannah Montana, Hayden Montgomery in Criminal Minds, and Dr. Pamela "Pam" Prentiss in The Jennie Project. She even voiced Diana Parker in The Proud Family episodes "Romeo Must Wed" and "Behind the Family Lines." 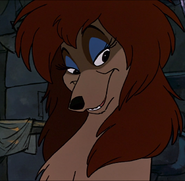 Diana Parker
(The Proud Family)
Add a photo to this gallery

Retrieved from "https://disney.fandom.com/wiki/Sheryl_Lee_Ralph?oldid=4075414"
Community content is available under CC-BY-SA unless otherwise noted.