“Think you can handle me?”
―Shifty about to start a race in Cars: Fast as Lightning

Shifty Sidewinder is a character in the Cars Toons episode The Radiator Springs 500½.

Shifty is painted mainly green, with his number 67 shown on a white circle that is on his sides and has a black outline. He has brown eyes, chrome rims, and three headlights and a tire on his roof rack. Only his front right fender matches his green paint, while the front right fender is light blue, and the rear fenders are yellow. He is modeled after a 1967 Baja Bug, which is a modification of a Volkswagen Beetle.[1]

Shifty is first introduced in The Radiator Springs 500½, where he goes with Sandy Dunes, Blue Grit and Idle Threat to Radiator Springs to meet Lightning McQueen. Upon seeing that McQueen is dressed up like Stanley, Shifty admits that Stanley should have still kept searching for anything other than Radiator Springs. His pals' insults are enough to make McQueen challenge them to an off-road race.

Mater gives them the course before they start the race, telling them that when they come to a fork in the path, they must go left. However, they all get confused with him saying "left is right", and all of them turn right, not knowing that Mater actually meant "left is correct" or that they are on the wrong path. Shifty and the other racers all find themselves going over bumpy hills, through a cactus patch, inside the Tailpipe Caverns, and finally in a creepy forest covered with corpses. Feeling frightened, Shifty and the others head back to Radiator Springs, surprised about how tough they thought Stanley would have been.

Shifty is a playable character in the mobile game Cars: Fast as Lightning. He was added in downloadable content released in August 2015 for the 1.3.0 update. Gems are required to unlock him, and when he is unlocked, he comes to Radiator Springs and meets up with Todd Marcus, telling him that he is joining the exhibition. However, Shifty does not have his own race track, as well as Sandy, Blue Grit and Idle, meaning that players have to use them on other characters' race tracks. 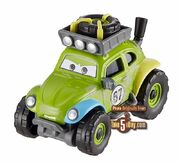