Shipwrecked is a 1991 action-adventure film intended for family viewing. In Norway, it was titled Haakon Haakonson.

The movie was produced by a consortium of Scandinavian companies and released in the U.S. in a dubbed English-language version by Walt Disney Pictures.

Shot on location in Fiji, Norway, Spain and the United Kingdom, the movie is a dramatization of Norwegian author Oluf Falck-Ytter's book Haakon Haakonsen: En Norsk Robinson (Haakon Haakonsen: A Norwegian Robinson). This adventure story aimed at young readers was inspired by Daniel Defoe's Robinson Crusoe and published in 1873.

The film has received favorable reviews as a well-made adventure story for families.

Haakon Haakonsen (Stian Smestad), a young Norwegian boy in the 1850s, becomes the sole support of his family as a cabin boy on a ship after his father is injured. Jens (Trond Peter Stamsø Munch), a family friend and a fellow shipmate of Haakon’s father, becomes an older brother to Haakon on their voyage.

At first, Haakon has a difficult time adjusting to life at sea, but eventually earns the respect of his shipmates while earning the distrust of the first mate - after Haakon catches the first mate with weapons he shouldn't have. The first mate forces him to promise not to reveal to the captain about the guns, and then keeps tabs on Haakon.

Haakon even discovers a female stowaway (Louisa Milwood-Haigh) who turns into a love interest. After the mysterious death of his admired captain and takeover by the first mate (Gabriel Byrne), a suspicious new set of shipmates comes on board. Being on board the ship becomes terrible and Haakon is set to be punished when the new captain finds Mary (the stowaway girl trying to reach her uncle in Calcutta) and punishes whoever helped her. However, before he can be whipped, Haakon survives the sinking of his ship in a terrible storm and wakes up on a deserted tropical island.

After searching the island and discovering treasure as well as wanted posters for an English pirate named Merrick, who looks identical to the new captain and former first mate, Haakon discovers that his suspicious shipmates are pirates.

Following a training with a sword and gun, Haakon even manages to use a horn when a gorilla attacks. Haakon befriends the gorilla. As days pass, Haakon begins to miss his family. One day, Haakon sees smoke from a distant island and tries various attempts to get there on a raft of his own.

Upon successfully arriving there, he finds a bunch of natives doing a night dance. Haakon eventually finds Mary with a bunch of traveling natives. When he sees one of the natives dragging Mary, Haakon springs into action frightening the natives with a gunshot until he backs into Jens who explains that the natives are peaceful and saved his and Mary's lives.

Mary explains that they have been traveling island to island looking for Haakon. As the three leave for the other island the next day, Haakon realizes that the pirates are returning to the island. Haakon and Jens managed to get help from Berg and Steine (Knut Walle and Harald Brenna). Haakon manages to outsmart the pirates and he, Hens, Mary, Berg, and Steine return to Norway.

Haakon reunites with his family and introduces them to Mary and that she will be staying with them for a while.

Shipwrecked was nominated for three Young Artist Awards in 1992: 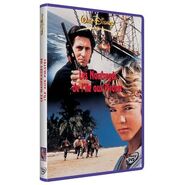 Add a photo to this gallery
Retrieved from "https://disney.fandom.com/wiki/Shipwrecked?oldid=4053941"
Community content is available under CC-BY-SA unless otherwise noted.