Disney Wiki
Register
Don't have an account?
Sign In
Advertisement
in: Characters, Jake and the Never Land Pirates characters, Males,
and 10 more

Ice, making ice, snow, and everything related to cold

Everything related to heat, warmth

ChillyZac (nephew)
ShiverJack is a recurring antagonist from the 2011-16 Disney Junior television series Jake and the Never Land Pirates. He is the scurvy pirate sorcerer who wants to turn Neverland into his own personal icy domain.

ShiverJack makes his first appearance in the episode of the same name. While Jake and his crew where planning to watch Belch Mountain erupt the volcano is miraculously frozen before their eyes. While investigating the scene, Jake and his crew spot Captain Frost's ship, the Winter Hawk and discover Frost trapped within a cage of ice. After his release, Captain Frost soon explains that the wicked pirate sorcerer ShiverJack has returned. Suddenly, ShiverJack reveals himself from a gust of icy wind, determined to freeze Neverland once more. When Jake protests that Neverland will never belong to the pirate sorcerer, ShiverJack attempts to freeze Jake and his crew with his trident, but they manage to dodge the trident's blast. Unfortunately, Bucky wasn't as lucky, and was frozen solid. ShiverJack soon set his eyes on the rest of the island, leaving Jake and his crew to come up with a plan to stop him. ShiverJack later resurfaces during Captain Hook and his crew treasure hunt, much to the fright of Hook's bumbling crew, who tried to flee, but were frozen solid by ShiverJack's icy wrath. In order to avoid the same fate as his crew, Captain Hook attempt to join forces with ShiverJack, this is short-lived as ShiverJack claims he works alone, freezing Hook solid in mere sentence before continuing molding the rest of the island in his frozen image. ShiverJack soon confronts Jake and his mateys once more, this time freezing both Izzy, Cubby, and Captain Frost in the process, leaving Jake alone to deal with the ice elemental, assured of his victory ShiverJack plunge his trident in the frozen ground sending Jake plummeting to his doom before heading off to Skull Rock. Little did ShiverJack know Jake managed to reach Izzy's pixie dust pouch just in time and soon confronts ShiverJack at Skull Rock, ShiverJack attempts to freeze Jake but the magic of Jake's sword proved too powerful even for ShiverJack's trident. A short battle between both pirates begins as ShiverJack manages to knock Jake's sword away, believing he has truly won ShiverJack transforms Skull Rock into his icy throne. This is short-lived as Skully has returns with Captain Flynn who has a magical orb containing the Never Winds which has the power to melt even ShiverJack's enchanted ice. Jake loads the orb into the cannon aboard Flynn's ship and fires it on ShiverJack weakening both the ice elemental and reverting his ice magic from Neverland. ShiverJack is last seen as Jake cast him out of Neverland but before leaving, ShiverJack acknowledges Jake as his only threat, and swears he'll return once more, colder than ever, before vanishing. 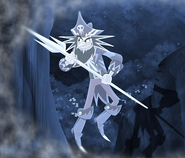 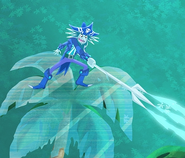