Shocker from the Marvel Comics

Supervillain
Criminal
The Shocker (real name Herman Schultz) is a shock-powered supervillain and enemy of Spider-Man.

Shocker was created by Stan Lee and John Romita.

Herman Schultz was among the salvage workers under Adrian Toomes who were forced out of a job by Stark's Damage Control. Now unemployed, he became a professional criminal with Toomes utilizing the technology salvaged from the Chitauri. With his partner Jackson Brice, Schultz comes face-to-face with Spider-Man, whom he tries to kill, during an arms trade with Aaron Davis. After Toomes kills Jackson Brice for threatneing to blackmail Toomes, Schultz inherits Brice's modified gauntlet and alias of "Shocker". Shocker later tries to sell the Chitauri technology to Mac Gargan. However, he was again intercepted by Spider-Man, dispatching Gargan and his associates. Shocker attempts to take out Spider-Man but gets himself caught into the boat's railing. Spider-Man quickly webs Schultz to the railing to prevent his escape. Shocker is later rescued by Toomes in his Vulture suit before the FBI can arrest him.

Knowing Spider-Man would try to follow him, Vulture deploys Shocker against Spider-Man, whom he smashes into a school bus while Vulture takes off on his heist. As Shocker prepares to deliver the final blow, Ned Leeds uses the Web-Shooters to snag Shocker's gauntlet, distracting Shocker long enough for Spider-Man to web him to the side of a bus. Shocker was then arrested by the police.

Shocker makes sporadic appearances throughout Ultimate Spider-Man: Web Warriors. In the episode "Burrito Run", Spider-Man, Power Man and Squirrel Girl find him trying to break into a building and engage him in battle. While Power Man and Squirrel Girl provide the distraction, Spider-Man uses taser webs on him. When Shocker regains consciousness, he doesn't know how he got there since he last remembers being in his apartment. As the three young heroes leave to complete a burrito run, Shocker begins to free himself. It turned out that Mesmero has taken control of Shocker's mind as he is accompanied in his next battle by Boomerang and Grizzly. Mesmero was forced by Spider-Man to free the villains from the mind-control. Spider-Man then left Boomerang, Mesmero and Shocker webbed up for the police. In the episode "Halloween Night on the Museum", he was chasing after Spider-Man until the latter defeated him. In the episode "Nightmare on Christmas", Shocker is seen robbing a bank on Christmas Eve until he fights Spider-Man, and is defeated and left for the police again. Shocker has a cameo appearance in "Contest of Champions" among the Grandmaster's villain collection against Spider-Man and the Collector. Shocker has a minor appearance in Ultimate Spider-Man vs. The Sinister Six. In the episode "Anti-Venom", Shocker was seen being defeated by Spider-Man and Agent Venom as Shocker was among Doctor Octopus's candidates for the HYDRA-backed Sinister Six.

Shocker appears in the 2017 series. This version is an overweight teenager who specializes in vibration technology. First appearing in the episode "Osborn Academy," Herman Schultz competes with Clayton Cole for a position at Osborn Academy with their sound-based technology until Spider-Man intervenes. The three-way battle was crashed by Jackal who steals Herman and Clayton's technology with the help of a stolen Stark Industries tech. The two of them help Spider-Man by telling him how to disable the tech. After Jackal gets away, Spider-Man brings Herman and Clayton back to Osborn Academy to face their actions as Spider-Man tells Osborn Academy's security team to grant them leniency. Norman Osborn takes the blame for driving the two boys into what had transpired. As Norman Osborn grants Herman a spot in Osborn Academy, he tells Clayton to try again next time much to the objection of Max Modell. 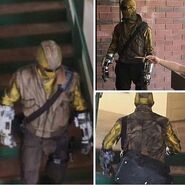 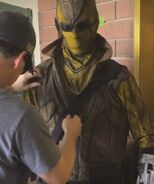 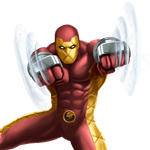