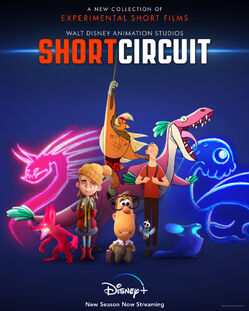 Short Circuit is a series of animated short films produced by artists and writers at Walt Disney Animation Studios. The films are independent shorts that are meant to "take risks in both visual style and story," much like Pixar's SparkShorts series.[1] These shorts were originally meant to be kept within the studio, but have since been released to the general public via Disney+. The first season premiered on January 24, 2020 while the second season premiered on August 4, 2021.