Traditional ceremonial, her brother in danger

Shuri is a Marvel Comics character who appears in both the Marvel Cinematic Universe and in Marvel Animation.

She is the Princess of Wakanda, the daughter of King T'Chaka and Queen Ramonda, and the sister of T'Challa. Shuri loves her brother deeply, and she helps him run Wakanda. She has genius-level intellect, being on the same intellectual level as Tony Stark, Hank Pym and Bruce Banner. Her extreme scientific knowledge helps not only Wakanda as a whole but also T'Challa in his role as the superhero Black Panther.

Shuri was created by Reginald Hudlin and John Romita Jr.

Shuri is with her mother Queen Ramonda to greet the return of her brother, Prince T'Challa, and his ally Nakia back to Wakanda. An impish Shuri asks Okoye whether T'Challa froze during his mission and laughs when Okoye confirms. The next day, Shuri participates in the ceremony for T'Challa's coronation watching Zuri anoint T'Challa; Zuri then inquires if anyone wishes to challenge the new king for the throne, Shuri jokingly raises her hand but explains she only wants to speed up the ceremony to change her clothes. However, the ceremony is disrupted by the arrival of M'Baku and his tribe to challenge T'Challa. T'Challa accepts and he duels with M'Baku; as they fight, Shuri strongly encourages T'Challa to fight back until he finally overpowers M'Baku.

When T'Challa is preparing for his mission to capture Ulysses Klaue, Shuri provides him with inventions she has been working on for him: "Sneakers", sound-nullifying boots; kimoyo beads; a remote-control car; and a modified version of his Panther Habit suit now transportable through his necklace via nanotechnology. Shuri explains that the suit can absorb kinetic energy and redistribute it after T'Challa kicks the suit to test it. Setting up a camera, Shuri innocently asks T'Challa to kick the suit again although T'Challa questions this before proceeding; by kicking the suit, he is knocked back by a kinetic wave while Shuri records the moment. Shuri is then ordered to erase the video by a humiliated T'Challa.

In Busan, T'Challa contacts Shuri for assistance during a car chase with Klaue. In her lab, Shuri remotely drives a car T'Challa stands on top of, and the royal siblings pursue Klaue's cars. Shuri eventually comes near Klaue's car, however, Klaue uses his prosthetic arm's sonic cannon to damage Shuri's car. The destruction severs Shuri's connection with the car, although T'Challa is able to apprehend Klaue in moments.

Shuri is at her lab to greet T'Challa following his return carrying an injured Everett Ross in tow. She takes care of Ross through surgery and successfully heals him with the Vibranium. When Ross awakens, Shuri jokes to a startled Ross they are in Kansas before saying that she healed him with Vibranium while he was unconscious that bewilders Ross. Before she could say more, Okoye arrives at the lab to warn Shuri that an outsider named Erik Killmonger arrived who claimed to have killed Klaue. Ross recognizes the individual as a former U.S. operative rather than a Wakandan. Sensing that something was wrong, Shuri contacts T'Challa to come back to her lab for Ross to dig out information on the visitor.

Killmonger is brought to the throne room where Shuri and her family are present. Killmonger stirs up the tension, including derisively calling Shuri a princess; Shuri says Killmonger is nothing more than a mercenary. However, when finally asked his name, Killmonger reveals his true identity as N'Jadaka, son of the late Prince N'Jobu. Killmonger then demands a duel against T'Challa for the throne of Wakanda. Returning to Warrior Falls, Shuri attends the duel confident that T'Challa would win. Unfortunately, Killmonger soon adds the upper hand and, to Shuri's horror, he wins the duel after killing Zuri and throwing T'Challa down the waterfall. Nakia quickly escorts her and Ramonda away for their safety.

Together with her mother, Nakia and Ross, Shuri travels to the Jabiri Tribe intending to give the last Heart-Shaped Herb to M'Baku. When the tribe ambushes them and takes them to M'Baku, Nakia presents him with the Herb. Instead of accepting it, M'Baku takes them to an unconscious T'Challa, who had been saved by a Jabari fisherman and covered in snow to prevent him from dying. Realizing that T'Challa would die in seconds if taken outside, the group decides to use the Herb to perform a ritual that successfully revives T'Challa. After T'Challa's recuperation, Shuri returns his Panther Habit necklace to him, claiming she will fight alongside the Black Panther.

Shuri, along with Nakia and Ross, sneaks into Shuri's lab to reclaim some of Shuri's inventions - Shuri retrieving her Vibranium Gauntlets and Nakia a Dora Milaje suit. Ross is given kimoyo beads by Shuri to help him pilot a Wakandan aircraft to eliminate the departing weapon cargos. Outside on Mount Bashenga, T'Challa and Killmonger have begun their battle. Shuri and Nakia join in and aid the Dora Milaje against Killmonger. Although they are briefly able to subdue Killmonger, he finally beats them. Shuri's gauntlets become damages and herself pinned down by Killmonger, but Shuri only tells Killmonger he will never be a real King. Shuri is then saved by T'Challa when he throws himself to Killmonger that both are knocked into the Vibranium mines. T'Challa orders Shuri to activate the Mlaglev trains so that the train's stabilizers would disrupt Killmonger's suit, despite being warned by Shuri that his suit would also be affected. Shuri then rushes in to help Nakia, Okoye, and Ayo as they are cornered by Border Tribe; however, the Jabiri Tribe suddenly arrives and turn back the tide of the battle, allowing Shuri and the others to get the Border Tribe to surrender. Meanwhile, Killmonger's defeat by T'Challa allows Shuri and her allies to return to the city.

T'Challa then takes Shuri to Oakland. Expressing disappointment over coming to a less-renowned area of California, Shuri asks T'Challa why they were here, and T'Challa tells Shuri that they were in the place where N'Jobu was killed. Shuri is relieved that the building the murder was in is being burned down, but T'Challa reveals he bought it and the surrounding area intending to make it the first Wakandan Outreach Center and appoints Shuri as the head of the science and information exchange. Shuri at first thinks T'Challa is joking before he disables the cloaking of the Royal Talon Flyer he brought to let the children nearby see it. Shuri introduces herself to the children and she begins sharing her work to the world.

In a post-credits scene, Shuri is supervising Bucky Barnes' rehabilitation from his scheduling. After Bucky wakes up in a remote Wakandan village, he finds Shuri nearby who asks how he was feeling. Bucky replies he feels good, and thanks Shuri for her work.

When the android Vision is brought to Wakanda by the Avengers, Shuri is asked by her brother to help safely extract the Mind Stone embedded on Vision's forehead before Thanos could claim the stone for his Infinity Gauntlet. The Black Order soon arrives to collect the stone, forcing the Avengers and the Wakandan military to fight them off in order to buy time for Shuri to complete the operation while she is guarded by Ayo and Scarlet Witch. After Scarlet leaves to help the others, however, they are finally confronted by Corvus Glaive, and he incapacitates Ayo. To save Vision, Shuri reactivates him while she tries to fight against Corvus Glaive, wearing her gauntlets to do so, but she is incapacitated and was unable to complete her work. She is one of the victims of Thanos snap.

Shuri is resurrected when Bruce Banner/Hulk uses the Infinity Gauntlet to undo the snap and bring everyone back to life. She joins the battle against Thanos and his army of Chitauri, Outriders and the Black Order. After the death of Thanos, Shuri is present with her family at the funeral of Tony Stark where Shuri and her brother are reunited with their mother.

Shuri makes a non-speaking appearance in "What If... T'Challa Became a Star-Lord?", set in an alternate timeline where T'Challa was kidnapped by Ravagers in 1988. Twenty years later, Shuri witnesses his brother's return to Wakanda with his friends he met in space. She is last seen speaking with Korath.

Shuri also appears in "What If... Killmonger Rescued Tony Stark?" in alternate timeline set in 2008. Shuri attends the event echoed by the death of her brother at the hands of Killmonger and then of Tony Stark whom he had orchestrated. Killmonger manages to deceive T'Chaka as General Ross sends Vibranium androids to war with Wakanda, posing as a savior. However, Shuri has been suspicious of her cousin since the beginning and ends up uncovering the truth about T'Challa and Tony's murder. She then manages to travel to America to reveal the truth to Pepper Potts and thus stop the coming war.

In "What If... The Watcher Broke His Oath?", as Wakanda bears the costs of war, Shuri, Pepper and the Dora Milaje storm the throne room to confront Killmonger but discover when they arrive that he is no longer there, having been taken away by The Watcher.

"Mr. Stark was a genius, but he's not the only genius." 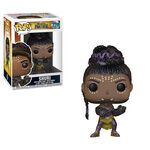