Sidon Ithano is an alien who appears in the Star Wars sequel trilogy. He commands Maz Kanata's pirate clan and leads them in defense of her secret fortress. He has the ability, as is common with his species, to mimic sounds.

Variously known as the Crimson Corsair, the Blood Buccaneer and the Red Raider, Sidon Ithano is the captain of the pirate ship Meson Martinet. A Delphidian, Ithano keeps his face concealed behind a red Kaleesh helmet. The Crimson Corsair rarely speaks, leaving the talking to his first mate, Quiggold. But his exploits speak for themselves: spacers whisper of his deeds in the Lost Clusters, at Adratharpe 7, and in Ponemah’s Sea of Sand, to name just a few adventures.

Sidon Ithano is seen at Maz's castle when the First Order deserter Finn almost accepts work from Captain Ithano in exchange for transport.

During the Battle of Exegol, Sidon Ithano fought with the Resistance against the Sith Eternal forces and later joinned the celebration of their victory at the Resistance base on Ajan Kloss. 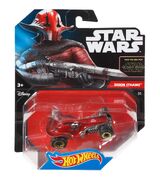