July 14, 2009 (as Orange Stinger)
Silly Symphony Swings is a wave swinger attraction in Paradise Pier at the Disneyland Resort in California, themed around the 1935 Mickey Mouse short The Band Concert.[1] (Contrary to the title, the attraction has nothing to do with the Silly Symphonies shorts.)

It is speculated that the new voice of the Silly Symphony Swings is that of the fictitious Mr. Tinkershmidt, the supposed new owner of Paradise Pier. Tinkershmidt and the Silly Symphony Swings update is part of the multi-year, $1.1 billion expansion plan for Disney's California Adventure Park.[2] Previews of the attraction were offered at California Adventure's Walt Disney Imagineering Blue Sky Cellar.

Closely following the plot of The Band Concert, the main column of the ride rises revealing a tornado which spins the riders to the tune of the William Tell Overture and William Tell's "Storm". Characters caught up in the tornado appear on the column of the spinning base and a lightning flash effect is incorporated into the attraction's ceiling. Once the tornado safely passes, the music comes to an end and the ride slows and lowers riders to the ground.

Below the attraction is a special viewing deck that overlooks Paradise Bay and provides for an alternate angle for World of Color. In the summer of 2011, a series of posters for various Mickey Mouse shorts were placed onto the walls of the lower deck

The Orange Stinger, the predecessor of Silly Symphony Swings, was a Zierer Wave Swinger enclosed in a large orange themed as bees. The ride opened to the public on February 8, 2001, and operated until July 14, 2009. Riders swung on suspended seats inside the enclosure which offered views of nearby Paradise Pier and Paradise Bay through large openings in the walls. These openings were made to look like peeled sections of an orange peel. The original bumblebee seats were removed on February 10, 2001 due to damage during use. After removal, the seats were unthemed swing seats. An orange scent effect was initially introduced into the attraction giving it the smell of a "real" orange, but was later removed because it attracted real bees.

The giant orange was a tribute to the orange fields that Disneyland was built on, as well as Orange County, where the Disneyland Resort is located.

The spiel announcer of the attraction is the recently created character Gustav Tinkershmidt, the owner of Paradise Pier, who was voiced by Corey Burton. The character first appeared as a spiel announcer for Mickey's Fun Wheel. Tinkershmidt and the attraction are part of the multi-year, $1.1 billion expansion plan for Disney California Adventure. The Paradise Pier portion of the expansion and update of the park was focused on bringing in a Victorian theme to the Pier's buildings as well as incorporating classic and modern Disney characters into the attractions. Early pitches for the attraction included a Pinocchio theme where the swings would become marionette strings held by Geppetto, though also incorporating Stromboli in its entrance, until the Band Concert theme was selected.

Although the attraction soft opened on May 28, 2010, it had an official grand opening on June 11th to commemorate the 75th anniversary of the original short. 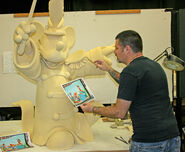 Work on the Mickey sculpture on the attraction's roof

Mickey as seen on the roof of the attraction

Detail of the interior of the ride