Images of Simba in television and motion picture productions.

Infant Simba with his mother Sarabi

Sarabi and Mufasa embrace each other of simba’s birth

Infant Simba with Rafiki and his parents

Simba being held up high

Simba being presented by Rafiki

Simba as a cub

Simba running toward his parents

"What about that shadowy place?"

Learning about the great circle of life.

“I never get to go anywhere.”

“My dad showed me the whole kingdom & I’ Gonna rule it all. Ha Ha.”

Beginning of "I Just Can't Wait To Be King"

I'm gonna be the main event

I'm working on my

No one saying, "Do this"

No one saying, "Stop that"

No one saying, "See here"

Free to run around all day...

Kings Don’t need advice from little hornbills for a start

Standing In The Spotlight

Oh I just can’t wait to be King

Poked by Zazu after calling him Banana Beak

“Danger? Ha. I walk on the Wild side. I laugh in the face of danger.”

"Hey! Why don't you pick on somebody your own size?."

Young Simba with his father Mufasa

Simba getting a first glimpse of the Wildebeest Stampede

The Wildebeest Stampede gets closer to Simba

Simba runs for his life

Simba hangs on to a tree

Simba as an Adult

Simba enjoying his new life with Timon and Pumbaa

Simba reveals that the lioness is Nala herself

climbing out of the water

Simba and Nala falling in love

"Listen, you think you can just show up and tell me how to live my life? You don't even know what I've been through!"

Simba angry about what has become of his home

Simba and his friends preparing for the battle

"The choice is yours, Scar. Either step down or a fight."

Scar about to tell Simba that he killed Mufasa

Simba forcing Scar to confess to the pride

"Everything You Ever Told Me Was A Lie."

Simba throwning Scar off the cliff of Pride Rock

Simba and Nala as King and Queen

Rafiki with Simba and Nala.
Add a photo to this gallery

Simba with Nala and Kiara

Simba trying to save his father in nightmare

Simba wakes up from his bad dream

Simba with Nuka in the battle

Simba being carried back to Pride Rock

Simba reacting to Kiara telling him that he will never be Mufasa.

Simba accepting Kovu into the pride

Cub Simba works on his roar.

Simba as a teenager

Simba with Kiara and Kion

Simba and Nala reunite with Kiara

Simba with Kiara and Tiifu

Simba informs Kion of his destiny

Adult Simba roars at Timon
Add a photo to this gallery

Simba with his family

Simba, his family and The Lion Guard watching Makuu and Pua fight for dominance over the crocodile float.

Simba thanks Pua for his services as leader of the crocodiles

Simba with the Lion Guard 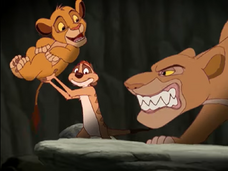 Infant Simba and Rafiki in the Blu-Ray Bloopers

Simba and Rafiki in the Blu-Ray Bloopers

Simba and Rafiki in the Blu-Ray Bloopers
Add a photo to this gallery
Retrieved from "https://disney.fandom.com/wiki/Simba/Gallery/Films_and_Television?oldid=3669662"
Community content is available under CC-BY-SA unless otherwise noted.