Matilda
Simon John Pegg is an English actor, voice actor, comedian, screenwriter, film producer, singer, and director. He is best known for having co-written and starred in the films: Shaun of the Dead, Hot Fuzz, The World's End, and the British comedy series Spaced. He is also well-known for playing Benji Dunn in the Mission: Impossible film series, Scotty in the Star Trek movies since 2009, Graeme Willy in the 2011 sci-fi comedy film, Paul, and voicing Buck the weasel in the Ice Age franchise.

For Disney, Pegg voiced several characters in Phineas and Ferb, including Paul the Delivery Guy for the British airing of "Delivery of Destiny" (American audiences heard Christian Slater), Pierre in "Imperfect Storm", the classic character of C-3PO as well as Candace's commanding officer in "Phineas and Ferb: Star Wars" and Shaun from the film, Shaun of the Dead, in which he reprised his role in the episode, "Night of the Living Pharmacists". He also voiced Pitch Kickham in the Randy Cunningham: 9th Grade Ninja episode "The McHugger Games", and Dengar in the animated series Star Wars: The Clone Wars and the DLC video game Star Wars: Battlefront. Additionally, he portrayed Unkar Plutt in Star Wars: The Force Awakens. He will also reprise his role as Buck in the upcoming Ice Age: Adventures of Buck Wild.

Dengar
(Star Wars: The Clone Wars and Star Wars: Battlefront)
Add a photo to this gallery 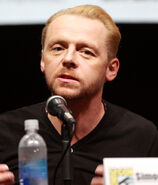 Simon Pegg attending the 2019 Tribeca Film Fest.
Add a photo to this gallery
Retrieved from "https://disney.fandom.com/wiki/Simon_Pegg?oldid=4552823"
Community content is available under CC-BY-SA unless otherwise noted.