The Seven Voyages of Sindbad

Compass of Your Heart (Composed by Alan Menken)

Sindbad's Storybook Voyage is a dark ride at Tokyo DisneySea at the Tokyo Disney Resort in Urayasu, Chiba, Japan. This attraction is located in the Arabian Coast port-of-call. The original version of the ride, called Sindbad's Seven Voyages, opened to guests on September 4, 2001. However, its dark tone made it unpopular with guests and the attraction was retooled with a lighter mood with the addition of an animal sidekick and an Alan Menken song titled "Compass of Your Heart". This version opened on March 29, 2007. The attraction is inspired by the story of Sindbad, a sailor from Arabian folktales.

The boat exits the station and passes Sindbad's Arabian home village in Baghdad. Everyone in the village wishes Sindbad and his tiger Chandu a safe journey. Just before entering a tunnel, three wise men give warning to dangerous weather. After passing through the tunnel, the boat takes you into a "rainstorm" at Mermaid Rocks with some light rain mist to add to the effect. On the left is Sindbad's broken ship which has been destroyed by the storm. Mermaids rescue Sindbad and Chandu and he is very grateful for his new friends that have saved them.

Sindbad gets a new ship and continues with Chandu on his journey. The next room has pirates that are are attacking the magical roc birds of Rukh Island. The feathers of these birds act as a key to open the room of treasures. Sindbad and Chandu try to stop the pirates from harming the birds. Riders then enter the Cave of the Giant, a room of treasures to find that Sindbad and Chandu have stopped the pirates and have taken one of the roc's feathers and put it into the lock of the prison that holds the Giant who was trying to guard the treasure. Instead of taking the treasure, Sindbad takes the magic feather and unlocks the cell to free the Giant, where Sindbad sings, "More than gems... more than gold... one good deed's worth more than wealth untold..."

In the next room the Giant sings with Sindbad, celebrating his new freedom with him. The Giant gives the gold to Sindbad and sends Sindbad and Chandu on their way. Sindbad then sails into the Palace of the Sultan, a land in India that has been overtaken by monkeys. The Sultan asks Sindbad to use his magic drum to help them calm the monkeys causing trouble in the area. In the next room, Sindbad has befriended the monkeys in the Land of the Monkeys and has everyone at peace, telling the monkeys that he's had fun with them, but he and Chandu must leave for home as he bids farewell to the monkeys. At the end of the room Sindbad's baby tiger Chandu can be seen peeking out from under a pile of bananas. Having made many friends along the way, Sindbad and Chandu receive help from one more new friend... a giant whale called the "Living Straits" that picks up their ship and helps them cross the rough seas.

Having arrived safely home, Sindbad takes the treasures and everything else that has been given to him from his journey and he shares it with his village. Everyone celebrates his safe return as the ride ends. The lyrics from the song "Compass of Your Heart" are the theme to the entire ride which says that more than any material things, more than wealth, the most important thing to life and your heart are Friends, and the friendships you encounter through your life.

Differences between the Original and Current versions

When the attraction was retooled, there were many alterations to shift the attraction's tone with most scenes being restaged and figures being altered, generally to present Sindbad in a more noble and active light, give the ride's story more focus and add Chandu and the new song. Elements and sequences from the original version that were changed in the new version included: 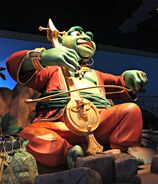 Retrieved from "https://disney.fandom.com/wiki/Sindbad%27s_Storybook_Voyage?oldid=4083436"
Community content is available under CC-BY-SA unless otherwise noted.