Disney Wiki
Register
Don't have an account?
Sign In
Advertisement
in: Television, Disney Channel shows, Beauty and the Beast,
and 7 more

Sing Me a Story with Belle

Sing Me a Story with Belle

"Sing Me a Story" by Lynsey McLeod

September 8, 1995 – December 11, 1999
Sing Me a Story with Belle is an American live-action series created by Patrick Davidson and Melissa Gould. The series features Belle from Beauty and the Beast, who works at her own bookstore in France. She is usually greeted by children who would like to hear a story. Belle interacts with the children and narrates classic Disney stories while doing activities around the bookstore. The series premiered on September 8, 1995 on Disney Channel.

According to Ken Weiner, vice president at Buena Vista Television, using classic animated shorts allows the show to present a higher quality of animation than would normally be feasible in an educational show that who get U.S. Federal Communications Commission (FCC) approval.

By early 1999, it was said that the show would present two short films per episode (with updated music), which Belle and the children would sometimes interrupt for discussion purposes or to "test cognitive abilities".

Belle (portrayed by Lynsey McLeod) lives in the country of France and owns her own music and bookshop. Helping her at the bookstore are Lewis and Carol (their names being a joke on author Lewis Carroll), two magical bookworms. Also at the bookstore is Harmony the Cat. The bookstore is visited by local children to whom Belle will tell (and sing) stories, usually with a moral that fit a situation happening in the shop or with the children.

Often classic Disney short films, such as "Pecos Bill" and "The Brave Little Tailor" are used to illustrate the stories.

Belle walks down the quiet countryside of France and greets the citizens of the town while singing "Sing Me a Story." She later enters her bookshop and the song ends.

Big Book: So sing me a story
Lewis & Carol: Sing me a rhyme
Harmony: Sing me all about what happened (purrs) Once upon a time

Belle: When I sing a story or you sing a rhyme
It is though I've heard it
For the very first time

The show premiered onDisney Channel on July 26, 1999. The show continued to play on Disney Channel in the early mornings as part of Playhouse Disney, in 2000. It was later taken off the channel for upcoming shows. It continued playing in the United Kingdom versions of Disney Channel and Playhouse Disney until August 2005, and was then played increasingly rarely, although it briefly came back as regular programming in September 2007, until it was axed altogether in November. It has not been on the air since. 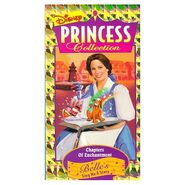