Tall, slender, skinny, and bald man with a long white moustache wearing a black cap with a red feather on it, a monocle, a black uniform, black shoes, and a knight armor (when in battle)

To protect the villagers from dragons

The Boy, The Reluctant Dragon, and the villagers

"Defeats" the dragon and helps redeem him

"Radish so red. Radish so red. Plucked from the heart of your warm little bed. Sprinkled with salt on the top of your head. Delicious."
Sir Giles is a dragon-slaying knight who is convinced by a young boy to take on one more challenge.

Sir Giles is first seen entering the town, announcing that he will vanquish the dragon; much to the boy's dismay since he found out earlier that the dragon is actually a very nice dragon who is mostly interested in poetry.

Next, he is seen bathing in his room at the inn as the boy enters to speak to him about the dragon; despite the fact that Sir Giles had previously told the innkeeper to not let anyone disturb him. Initially, Sir Giles believes that the dragon must have caused the boy some kind of misery and woe and begins to make various guesses as to what it is, from devouring the boy's flocks to making off with his parents, to kidnapping some fair damsel with flaxen hair, ruby lips, and form divine. The boy simply states that the dragon won't fight, to which Sir Giles says "Preposterous! the fellow must be an infernal cad. Bit of a rotter, what?". The boy then explains that the dragon is actually a nice old dragon who likes to write poetry; much to Sir Giles' joy, as he's a bit of a bard himself. He then starts reciting a poem called "Ode to a Fleecy Cloud"; which causes the boy to realize that he is much the opposite of the way knights are portrayed in his storybook. Nevertheless, Sir Giles agrees to go with the boy to talk to the dragon about the fight.

However, this whole time. the boy has been wanting Sir Giles to tell the dragon about the fight, so he proceeds to do so with his own poem. The dragon is shocked and refuses to fight since there's nothing to fight and he doesn't believe in it. Although both Sir Giles and the boy tell him that the whole village is expecting a fight and that they will be severely disappointed if there isn't one, the dragon still refuses and goes into his cave home, bidding them goodnight.

Then, Sir Giles comes up with an idea: he will fake the fight so that neither he nor the dragon will get hurt. After consulting the boy's book and seeing that there's nothing against it, the boy and the dragon both agree to his plan. However, at the last minute, the dragon remembers that he can't breathe fire and tries to change his friends' minds, but the boy and Sir Giles have already left.

That following morning as the villagers gathered outside the dragon's cave to watch the fight, Sir Giles rides in on horseback, clad in armor, ready for the fight. Inside the cave, the dragon and the boy are both very distressed because the fight can't take place as no matter how hard he tries, the dragon can't get himself to breathe fire. However, when the boy states that he wishes that the dragon was a real dragon instead of a "punk poet," the dragon gets angry and finally starts to breathe fire. Delighted, the dragon asks the boy to call him a "punk poet" multiple times so that he can get madder and his fire can get bigger.

The "fight" begins with Sir Giles charging at the dragon, who manages to hide in a cloud of smoke he created. Sir Giles then chases the dragon into his cave, where they proceed to fan the smoke from a fire out the entrance and shout things like "Take that!" and "Help!", all while having some tea; much to Sir Giles' horse's dismay.

A little later, the two resume the "fight" outside, where they proceed to charge at each other again. After the collision, another cloud of smoke is created, in which the dragon and Sir Giles dance while shouting the same things over again; much to the horse's dismay again. Then, they both decide it is time for the dragon to "die", so they end their fake fight with the dragon pretending he has been stabbed by Sir Giles' spear. After that, Sir Giles "reforms the ferocious dragon" and the dragon is finally welcomed into society.

He appears in toon town chasing the Dragon on his horse after Eddie crashes his car. Sir Giles, his horse, and the dragon join the rest of the toons as Roger Rabbit reads Marvin Acme's will and rejoices knowing Marvin kept his word and left Toon Town to the Toons. He then heads back home to Toon Town knowing it will be safe from future harm, singing Smile Darn Ya Smile with the other toons.

Sir Giles makes many cameos in House of Mouse, usually seen sitting with The Dragon. He appears multiple times in the shows intro clapping with the other toons as the show is about to start.

Sir Giles whispering a plan to the Reluctant Dragon

Sir Giles wondering where the Reluctant Dragon disappeared to

Sir Giles chasing the Reluctant Dragon into his cave

Sir Giles and the Reluctant Dragon faking the fight

Sir Giles, the Boy, and the villagers welcoming the Reluctant Dragon into society 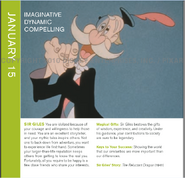 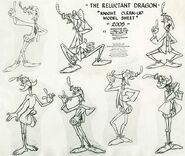 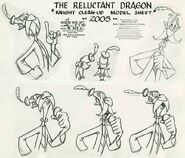 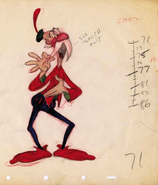 Retrieved from "https://disney.fandom.com/wiki/Sir_Giles?oldid=3983448"
Community content is available under CC-BY-SA unless otherwise noted.