“The Sith rely on their passion for their strength. They think inwards, only about themselves.”
―Anakin Skywalker

The Sith Order (simply known as the Sith) is an organization comprised of dark side Force-users in the Star Wars franchise. They are the antithesis and ancient enemies of the Jedi.

Often, other villainous factions, namely the Confederacy of Independent Systems, the Galactic Empire, the Inquisitorius, Crimson Dawn, and the First Order, are either directly or indirectly related to the Sith.

The Sith Lords dedicate themselves to the dark side of the Force which is accessed through negative, uncontrolled or aggressive emotions and feelings, such as pain, fear, anger, hatred, envy, greed, pride, despair, and unrestrained passions. Using any of these emotions while being a Force-user and thereby using the Force, would cause the dark side to enhance these emotions beyond the control of the individual, sometimes to the point of mental or emotional instability. It could warp the personality of the individual into a more evil one and turn them to the dark side.

The Sith members, are known by the ranks of Sith apprentice, Sith Lord and Sith Master. Traditionally they use the title "Darth" before their Sith name. The Sith are the archenemies of the Jedi, and like them, their main weapon is the lightsaber, only with all of these having a red kyber or synthetic crystal for their blade.

They only exist two at a time, a master and an apprentice, due to Darth Bane's establishment of the Rule of Two. Despite this rule, the Sith maintained an army of followers known as the Sith Eternal. This cult served the Sith as their soldiers and offering up any Force-Sensitive candidates in the event of the Apprentice Sith Lord being too weak to replace the Sith Master. Some Sith in the Rule of Two also would utilize Essence Transfer to possess their apprentices as to live on and continue their existence. This practice of possession was rendered extinct when Darth Sidious killed Darth Plagueis.

Unlike the Jedi, the the Sith are not bound to a code of ethics, morality, principles and justice. As a result, they are far more cold, cruel, brutal and ruthless than their archenemies. Despite this, some Sith like Darth Vader are known to have a sense of morals, honor, and principles.

The ultimate goal of the Sith is to conquer and rule the galaxy. The members of the Sith who have the rank of Sith Lord or Sith Master are addressed as "Lord" or "Master" before being addressed by their Sith names.

“Always two there are; no more, no less. A master and an apprentice.”
―Yoda

The Rule of Two is a Sith philosophy created by Darth Bane that only two Sith Lords can exist at any given time, though they could maintain an army of Sith Troopers. The Dark Lord of the Sith to embody power, and the apprentice to crave it. The Jedi misconstrued the Rule of Two as being only two Sith at any time, not realizing they had great numbers of Sith cultists in the Sith Eternal hidden throughout the galaxy to serve as their army. Bane created the Rule of Two so the Sith could operate in secret and prevent infighting, using subterfuge to plot their revenge against the Jedi. For a thousand years, the Sith would remain in hiding until the time was right to reveal themselves.

The Rule of Two, however, is just a pale imitation of its predecessor, the Doctrine of the Dyad. The legendary dyad in the Force, a rare and unique unbreakable connection in which the pair bonded is actually one in the Force, is said to allow the two individuals connected to have access to a great number of abilities, and together unlock a power with no limits. Desiring to obtain more power, the Sith sought to create a dyad in the Force; Darth Plagueis attempted to create a dyad with his apprentice, Darth Sidious; later Sidious tried to create one with Anakin Skywalker. However, both these attempts failed. Unlike other Force-bonds, Force-users are unable to create a dyad, so the attempts only managed to create pale imitations of the real one.

Unfortunately, this philosophy would eventually lead to the Sith Order's downfall. If Darth Sidious had abandoned this Sith philosophy after he had gained full control over the Galactic Republic, and brought the Jedi Order to near-extinction, as well as recruiting Force-sensitives individuals, and training them in the ways of the dark side of the Force, he would have not only increased the Sith's numbers, but also prevented the destruction of the Sith Order itself.

Code of the Sith

The Sith Code is a set of rules and teachings that governed the behavior of the Sith Order, it is the dark counterpart of the Jedi Code.

Sometime after the end of the Hundred-Year Darkness, the Sith Order was created by an unnamed rogue Jedi after he was exiled from the Jedi Order by the Jedi High Council. He believed that the true potential of the Jedi involved tapping into the dark side of the Force. Prior to his expulsion from the Jedi Order, this unnamed male Jedi was already secretly studying the forbidden teachings of the dark side of the Force, something that the Jedi High Council were completely unaware of until after he established the Sith Order. The Dark Jedi gained a number of followers, and their actions led to the formation of the Sith Empire. For thousands of years they have been the eternal enemy of the Jedi since the formation of their organization, as well as the fact they have tried to conquer and rule the galaxy.

Like the Jedi, the Sith used kyber crystals to power their lightsabers. However, as revealed by Palpatine, the main tradition of obtaining lightsaber crystals was to steal one from a Jedi. Then the Sith Lord had to corrupt it with the dark side of the Force, turning it red, a technique referred to as "making the crystal bleed".

As the Sith Order became stronger and more powerful, they had built many Sith Temples throughout the galaxy over the years, to serve as Sith academies to train new generations of Sith Lords across the galaxy. The Malachor Sith Temple (considered to be the very first according to historians among their ranks) the Mustafar Sith Temple, and the famous Moraband Sith Templea (located at the Valley of the Dark Lords), served as their headquarters.

At one point thousands of years before the Battle of Yavin, an unnamed female Dark Lord of the Sith constructed another Sith Temple on the planet of Malachor, which harbored a superweapon capable of destroying all life. In retaliation, the Jedi launched an assault on Malachor but were utterly wiped out after the weapon activated, turning them all to stone.

For thousands of years the Sith continued to gain dominance throughout the galaxy, but their empire ultimately fell due to infighting between the various Sith Lords and their respective factions. The only survivor of this strife was Darth Bane, who created the Rule of Two. The Sith Order were believed to have been entirely wiped out by the Jedi Order, however, unknown to the Jedi and the people of the galaxy, Bane utilized his new philosophy, the Rule of Two, to rebuild the Sith.

Bane's Sith philosophy stated that only two Sith can exist at any given time. So the Sith could operate in secret, using subterfuge to plot their revenge against the Jedi. Eventually, Bane was killed by the Jedi (when they learned of his survival and his new Sith philosophy) but unbeknownst to them, Bane had secretly taken an apprentice. Thus, by letting himself be killed, Bane had drawn the Jedi's attention away from the Sith, leading them to think that the Sith Order had been destroyed for good. For a thousand years, the Sith would remain in hiding until the time was right to reveal themselves. Their hiding in the shadows was inadvertently aided by the actions of the Jedi, who purged all the knowledge of the Sith they found from the galaxy, leaving them completely unprepared for the Sith's eventual return. This only helped the Sith Order to become stronger, and more powerful than ever before. Additionally, the Sith Eternal, their loyal followers, helped to maintain the ruse while loyally and fanatically serving their liege lords.

After thousands of years, the Sith reintroduced themselves to the galaxy, when Darth Maul was sent to Tatooine by his mentor, Sheev Palpatine, to capture the queen of Naboo, Padmé Amidala. During this mission he was confronted by Jedi Master Qui-Gon Jinn. During their duel, Qui-Gon realized that not only did his opponent knew the ways of the Force, but he was also familiar with the Jedi art of lightsaber combat. He then concluded that the only viable explanation was that his opponent was a Sith.

Unknown to the people of the galaxy, Sheev Palpatine, the Supreme Chancellor of the Galactic Republic, was secretly Darth Sidious, the Dark Lord of the Sith and leader of the Sith Order. He had used his position to orchestrate the Clone Wars and strategically gain more power. Over the next three years, Sidious became progressively more powerful, and nearing the end of the Clone Wars, he had finally gained full control over the Galactic Senate. It was not until he had successfully converted Anakin Skywalker to the ways of the Sith, turning him into the ruthless Sith Lord Darth Vader, that he initiated Order 66 which was a brutal tactical strike targetting all Jedi. Mace Windu's extremism and attempted murder on Sidious, gave the Dark Lord the pretext he needed to begin the Great Jedi Purge, bringing the Jedi Order to the brink of extinction. He restored the Sith Empire, reorganizing the Galactic Republic into the First Galactic Empire, and transforming the Galactic Senate into the Imperial Senate.

For approximately fourteen years, Sidious oppressed the people of the galaxy. This eventually resulted in the founding of the Rebel Alliance, and the Galactic Civil War that would last for nine long years. At the Battle of Endor, Darth Vader finally broke away from the dark side, becoming Anakin Skywalker once again. When Anakin killed Sidious, he had killed the last surviving member of the Sith Order. However, Sidious would later resurrect himself via forbidden teachings of the dark side of the Force to transfer his spirit into an undead clone of himself after being killed by Anakin, though he was left in a severely weakened state, as he was no physical threat to the galaxy. As a result, he needed Snoke and the First Order to accomplish his goals to conquer the New Republic and reinstate a new Sith Empire. Several years later, the Sith made their return through him during the time of the war between the First Order and the Resistance.

Sidious allied the Sith Eternal (their loyalist army of zealots) with the First Order to try to reconquer the the galaxy. During the Battle of Exegol, in which the entire galaxy rose up to fight against the Sith Eternal forces, the Jedi aspirant Rey (the granddaughter of Sidious) would destroy the Sith once-and-for all using the Skywalker's and Leia's lightsabers to redirect Sidious' Force lightning back at him. With Sidious truly gone, the remaining forces of the Sith Eternal were annihilated, ultimately vanquishing the Sith from the galaxy. 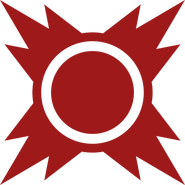 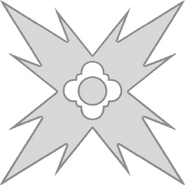 The symbol of the dark side of the Force

Darth Vader, Darth Maul, and Darth Sidious; notable practitioners of the dark side of the Force