To guide the way to Exegol

A Sith wayfinder is a pyramid-shaped device created by the Sith to guide the way to the hidden Sith world of Exegol. Only two wayfinders existed with one belonging to the deceased Darth Vader which was located on Mustafar and the other in the possession of Emperor Palpatine which was located in the wreckage of the Death Star II on the ocean moon of Kef Bir.

Sith wayfinders are shaped like holocrons and made from Kathol resin. Sith wayfinders act as hyperspatial lodestones, allowing safe passage through the Unknown Regions to Exegol, the hidden world of the Sith.

The ancient Sith created two wayfinders, pointing the way to their secret location of Exegol via the Red Honeycomb Zone in the Unknown Regions. Each wayfinder was entrusted to a Sith Lord, a title which, was limited to a Sith Master and a Sith apprentice.

As the last Dark Lords of the Sith, Emperor Palpatine and Darth Vader were each owners of the Sith wayfinders that revealed the path to Exegol. The Emperor of the Galactic Empire stored his wayfinder in a secret chamber adjacent to his throne room on the Death Star II at the time of the Battle of Endor. The other wayfinder was located within Vader's castle on the volcanic world of Mustafar. After their deaths and the end of the Galactic Civil War, both wayfinders remained hidden for decades.

The astronavigation systems of starships can be adapted to accept the binary signals emitted by the wayfinders and interpret them as hyperspace jump coordinates. Kylo Ren adapted his TIE whisper, in this way to locate Exegol, and Rey later did the same to Luke Skywalker's X-wing for the same purpose.

During the war between the Resistance and the First Order, Supreme Leader Kylo Ren finds Vader's wayfinder on Mustafar, and uses it to travel to Exegol, where meets a revived Emperor Palpatine who offers him the Throne of the Sith and the command the Final Order, a massive fleet of Xyston-class Star Destroyers designed by the Sith Eternal, if he kills Rey.

Meanwhile, Rey and other members of the Resistance look for the second wayfinder. She eventually finds the Emperor's wayfinder on Pasaana inside the ruins of the second Death Star. However, Rey was being followed by Ren, who destroys the second wayfinder in front of her. Rey duels Kylo, but a dying Leia reaches for them, ending their fight. Rey saves his life and confesses her romantic feelings for him which helps to redeem Kylo Ren, along with his mother's sacrifice. Rey then leaves the ruins aboard his TIE whisper, which has the first wayfinder inside.

Rey travels to Ahch-To to exile herself and burns Ren's ship, unaware of the wayfinder inside it. But after being convinced by Luke Skywalker's Force spirit to face Palpatine, Rey finds and recovers Ren's wayfinder from the wreckage of his TIE whisper and uses it to guide the Resistance to Exegol in Luke's T-65B X-wing. Without his ship and the wayfinder, Ben Solo finds an old TIE scout in the wreckage of the second Death Star and drives it to Exegol while following the tracking signals Rey is transmitting. 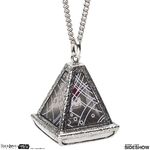 Luke Skywalker's writings about the Sith wayfinder in the Jedi texts.

Kylo Ren using the wayfinder to travel to Exegol.

Vader's wayfinder being used by Rey while sending coordinates to Exegol to the Resistance.