Disney Wiki
Register
Don't have an account?
Sign In
Advertisement
in: Characters, The Nightmare Before Christmas characters, Deer,
and 16 more

Dr. Finkelstein (Creator)
The Skeletal Reindeer are skeletal versions of reindeer and characters in The Nightmare Before Christmas. They were created by Dr. Finkelstein to help Jack assume the role of Santa Claus, which actually causes a disaster.

When Jack plans to take over Christmas, Igor gives Dr. Finkelstein the blueprints to help him create reindeer for Jack to help him become Sandy Claws. They are later seen being created during the musical number "Making Christmas" in which all three are successfully created and ready for Jack to go on his sleigh. Later, Jack rides on his sleigh to deliver toys to children, which actually causes a disaster. As Jack continues his plan to deliver more toys, the military unit prepares to take out Jack in order to protect the people from Jack taking over the holiday. All three of the skeletal reindeer were destroyed when Jack's sleigh gets a direct hit by the military unit as the Mayor of Halloween Town says that the Christmas plan was a bad idea. 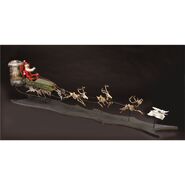 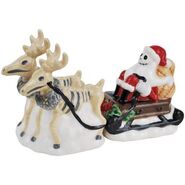 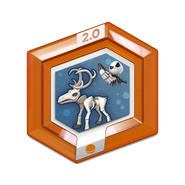