Disney Wiki
Register
Don't have an account?
Sign In
Advertisement
in: Characters, Disney characters, Pirates of the Caribbean characters,
and 13 more

Pirates of the Caribbean
Battle for the Sunken Treasure

Jolly Roger (according to Marc Davis and Walt Disney during development)

Deceased
The Skeleton Helmsman is a character who originated from the original Pirates of the Caribbean attractions. Hence his name, he is a deceased sailor controlling the helm.

The helmsman was once a sailor (likely a pirate) aboard a sailing ship in the 18th century. While sailing of the coast of Isla Tesoro's Hurricane Lagoon in the Caribbean, their ship was beached within the island's Ghostly Grotto. It was here that the helmsman would die in the wreck.

The helmsman's skeleton would remain intact for years to come, doomed to sail through an endless storm for all eternity. It is believed that like so many of the grotto's residents, the helmsman is haunted by the ghost of its mortal self.

The Skeleton Helmsman was designed by Marc Davis and slated to appear in Pirates of the Caribbean since it was being developed as a walk-through wax-museum in Disneyland. The helmsman would appear in the final ride and become one of the staples of the attraction's iconography.

Originally, the helmsman was to have dialogue play for his scene, recorded by Paul Frees, about his braving through the storm. According to this cut dialogue, the ship he was steering contained The Royal Fortune and was headed for the Spanish Main. The Royal Fortune being the name historically given to the ships of pirate Captain Bartholomew Roberts who was featured in old scripts for the Pirates of the Caribbean.

Originally it was represented with an authentic human-skeleton due to the lacking quality of fake skeletons of the day. The original skeletons were eventually phased out for more realistic props however it is noted that parts of the original bones are apparently still present in the current figures.

Due to the success of the attraction at Disneyland, the Pirates of the Caribbean attraction was later constructed in Magic Kingdom, Tokyo Disneyland, and Disneyland Paris where it features the same scene with the helmsman.

The helmsman was seen in the Dead Man's Cove sequence where he is seen controlling a helm hence his name on a stormy sea located on Hurricane Lagoon before guests pass through the Crew's Quarters.

In Walt Disney World, the helmsman is found nearby the Talking Skull before guests go over a waterfall and into the golden-age of piracy. When the skull's eyes flash red they are taking a photo of guests in-front of the helmsman which can be obtained after the ride ends. In Disneyland Paris, the helmsman is seen alongside an undead Captain Barbossa who chuckles and slashes at guests at they pass by the beached vessel.

Battle for the Sunken Treasure

The scene where the riders pass through Hurricane Harbor was recreated and redesigned where the helmsman transforms into Jack Sparrow.

In the Davy Jones' Locker segment of this video-game, one of the damned sailors is a skeleton helmsman who disappears when encountered by Jack.

The helmsman is one of the skeleton enemies in the Dead Man's Cove level of this video-game, attacking the player and Black Barty. The helmsman is seen in the cutscene introducing the skeletons and has the difference in adaptation of having a hook-hand.

The Skeleton Helmsman is a playable character in this movie game. His model has him permanently standing on a wooden platform while holding a helm as Yo Ho (A Pirate's Life for Me) plays.

The Helmsman's Sorcerers of the Magic Kingdom spell card.

A plush of the helmsman from the Disney Wishables line 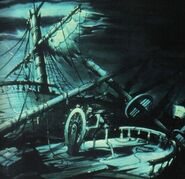 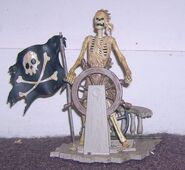 An action-figure of the Helmsman from 2006