Deceased
The Skeleton Pillager is a character from Pirates of the Caribbean.

The pillager was a pirate at some point during or in the fallout of the golden age of piracy. They would be part of a party of pirates that travelled to the Dead Man's Cove of Isla Tesoro either to bury or unearth a treasure. Due to infighting for the treasure, the pillager along with at-least two of their comrades were killed.

The pillager's corpse would remain impaled on a nearby rock in the caverns with a seagull making its nest on his hat. It is implied that due to the supernatural nature of the grotto, the skeleton is haunted.

The pillager appeared in the Dead Man's Cove segment of the original ride, being impaled on a rock nearby a beach. As guests pass by, a seagull perched on a nest in the pillager's hat squawks at them.

The pillager appears in Jack Sparrow's cave in this attraction, impaled against a mast rather than a rock.

The pillager is among the undead skeletons who attack the protagonist and Black Barty in this video-game with the pillager even having the seagull nest on their hat.

A figurine set with the pillager alongside the Auctioneer, Hook Hand Pirate, Redd, The Pooped Pirate, and Barker Bird 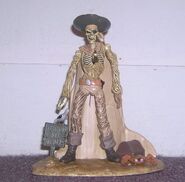