The Skeleton Pirates are minor antagonists in James and the Giant Peach.

James and the Giant Peach

It is unknown if the Skeleton Pirates are still alive after their battle with Mr. Centipede, James, and Miss Spider.

Paul Bunyan as a Viking 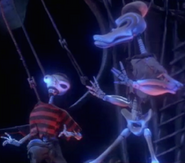 Retrieved from "https://disney.fandom.com/wiki/Skeleton_Pirates?oldid=4405271"
Community content is available under CC-BY-SA unless otherwise noted.