Control over the weather

Master Skellig Ro is a character who appears in the Disney Junior animated series, Miles from Tomorrowland. He is known as the greatest Naxos master in the universe. He lives alone on a planet called Arridium and barely anyone has even met him. Miles and Loretta's mother, Phoebe Callisto, is one of the lucky few who has ever met him in person as well learn beside him.

In the weak gravity of Arridium, Skellig Ro is known to move fast as the wind, that people can only get a slight glimpse of him before he disappears without a trace. It is also shown that he is capable of controlling the weather, which he uses to test the skills of those who wish to learn from him. 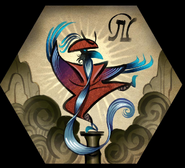 Retrieved from "https://disney.fandom.com/wiki/Skellig_Ro?oldid=3055151"
Community content is available under CC-BY-SA unless otherwise noted.