Skippy's first and only appearance in ExtraTERRORestrial Alien Encounter is when he is forced to demonstrate Tomorrowland Interplanetary Convention Center's "practically painless" teleportation system. The creature's charred and disoriented appearance after being teleported a short distance across the room suggests the technology is flawed. While teleporting Skippy back across the room, S.I.R. pauses the process, demonstrating how the technology can be used to suspend subjects in teleportation indefinitely.

Much like its predecessor, Stitch's Great Escape! includes a demonstration of the transport system, with another comical appearance of Skippy. In this ride, the mangled Skippy is repurposed as a new character known only as the "doughnut guy", who is portrayed as being a slob and enemy of the United Galactic Federation. This allows both versions of the previous Skippy to appear at the same time.

Skippy makes a cameo in the mobile game Disney Magic Kingdoms, appearing as part of the game's representation of Stitch's Great Escape!. He appears in silhouette form in a yellow clouded teleportation tube on either side of the attraction's entrance, popping in and out every few seconds.

Behind the scenes image of Skippy 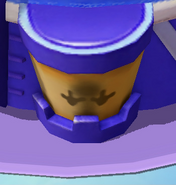 Skippy in Disney Magic Kingdoms
Add a photo to this gallery

Retrieved from "https://disney.fandom.com/wiki/Skippy_(alien)?oldid=4388207"
Community content is available under CC-BY-SA unless otherwise noted.