Anna Camp (2016-2019)
Skylar Astin Lipstein, known professionally as Skylar Astin is an American actor, voice actor, singer, and model. He is probably best known for his role as Jesse Swanson in the first two films of the Pitch Perfect trilogy. He is also known for playing Isaiah Miller in the TV drama Graves.

For Disney, he voiced Roy in Wreck-It Ralph and Frankenstein in Vampirina. 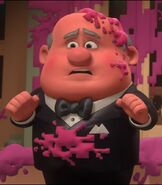 Roy
(Wreck-It Ralph)
Add a photo to this gallery

Skylar Astin at premiere of Wreck-It Ralph in October 2012.

Skylar Astin poses in the Press Room at the 2015 Fox Teen Choice Awards.

Skylar Astin speaks at the Graves panel at the EPIX portion of the 2017 Summer TCA Tour.

Skylar Astin speaks at the Zoey's Extrodinary Playlist panel at NBC portion of the 2020 Winter TCA Tour.
Add a photo to this gallery
Retrieved from "https://disney.fandom.com/wiki/Skylar_Astin?oldid=4015594"
Community content is available under CC-BY-SA unless otherwise noted.