The Skyway was a gondola lift attraction at that previously operated at Disneyland, the Magic Kingdom, and Tokyo Disneyland. Each iteration of the attraction took riders from their park's respective Fantasyland to Tomorrowland, and vice versa. The Disneyland Skyway was the first aerial ropeway in the United States when it opened in 1956.

At the 2017 D23 Expo, the Disney Skyliner, an aerial tramway that functions as a full-fledged transportation system, was announced for the Walt Disney World. The Skyliner is set to connect Disney's Art of Animation Resort, Disney's Pop Century Resort, and Disney's Caribbean Beach Resort with Disney's Hollywood Studios and the International Gateway at Epcot.

The Skyway at Disneyland, built by Von Roll, Ltd. of Bern, Switzerland, opened on June 23, 1956 as the first Von Roll Type 101 aerial ropeway in the United States. The Skyway shuttled guests between Tomorrowland and Fantasyland in exchange for a "D" coupon. A few years later, the Skyway temporarily closed to accommodate construction of the Matterhorn Bobsleds attraction. The Matterhorn was to be built in the place of Holiday Hill, a dirt mound on which the central support pylon for the Skyway originally sat. The Skyway reopened alongside the Matterhorn, Motor Boat Cruise, Submarine Voyage and Disneyland-ALWEG Monorail System in 1959, with the Skyway passing directly through the center of the Matterhorn by way of two holes on either side of the mountain.

In 1965, the attraction's original round two-seater buckets were replaced by rectangular four-seater buckets designed by Imagineer Bob Gurr, doubling capacity.

During the Fantasyland renovation at Disneyland in the early 1980s, the Skyway made only roundtrips from Tomorrowland.

Disneyland closed the Skyway on November 9, 1994. At the time, a Disney spokesperson claimed in the Orange County Register that the closure was due to declining popularity and that the attraction's staffing would be needed to work the then-upcoming Indiana Jones Adventure: Temple of the Forbidden Eye attraction that would open in 1995, though outside speculation suggests the closure was due to stress cracks in the Matterhorn supports and a desire to keep operating costs low. The attraction's supports and Tomorrowland station were removed shortly after its closure, though the Fantasyland station still stands derelict as of 2016. However, on May 11, 2016, the City of Anaheim approved a permit to the Walt Disney World Company for the "demolition of 5,132 sq.ft for Skyway Building #7301", signaling the likely demolition of the chalet as land clearing for construction of Star Wars: Galaxy's Edge had reached the chalet's western side. The chalet was finally demolished after park closing on June 14, 2016.

It was seen in Blossom in the season 3 episode of "The Best Laid Plans of Mice and Men", where Blossom and Sky ride it and see Blossom's boyfriend Vinnie embracing a girl, later revealed to be his cousin.

The Skyway opened at Walt Disney World's Magic Kingdom as one of the park's opening day attractions on October 1, 1971. Like its Disneyland counterpart, the Skyway shuttled guests between Tomorrowland and Fantasyland in exchange for a "D" coupon. This version of the Skyway was unique in that it did not travel in a straight line over the park. Gondolas descended to an L-shaped turn midway through the attraction before ascending again and traveling on towards their destination.

The Magic Kingdom's Skyway closed on November 9, 1999, exactly five years after the Disneyland version closed. The Tomorrowland station was partially demolished in the summer of 2009 during the refurbishment of Space Mountain, with its lower level left intact to continue serving as a restroom facility. The Fantasyland station was used for stroller parking, then later demolished in 2011 make way for expanded restrooms and a new transition area between Fantasyland and Liberty Square.

Tokyo Disneyland's Skyway opened along with the park as an opening day attraction on April 15, 1983. Though, like its American counterparts, it shuttled guests between Tomorrowland and Fantasyland, the overwhelming majority of the short, two-and-a-half minute trip took guests over the southwestern edge of Tomorrowland. This version of the Skyway uniquely was not open-air like its American counterparts, with Plexiglas windows keeping riders safe from the elements.

The Skyway with the shortest ride duration would also be the shortest-lived: Tokyo Disneyland's Skyway closed on November 3, 1998. The Fantasyland station, nearly identical to the Skyway chalet at Disneyland in California, was removed to make way for Pooh's Hunny Hunt, which opened in 2000. 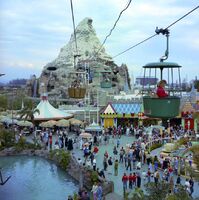