Sleeping Beauty Castle is a fairy tale castle at the center of Disneyland and formerly at Hong Kong Disneyland. It is based on the late-19th century Neuschwanstein Castle in Bavaria, Germany.[1]

Opened July 17, 1955, the castle is the oldest of all Disney castles. Its primary inspiration was the Neuschwanstein Castle in Germany. Though it reaches a height of only 77 feet (23 m), it was designed by Herbert Ryman[2] to appear taller through a process known as forced perspective; design elements are larger at the foundation and smaller at the turrets. It initially featured an empty upper level that was never intended to house an attraction, but Walt Disney was not satisfied with what he viewed as wasted space, and challenged his Imagineers to find some use for the space.

Beginning April 29, 1957, visitors were able to walk through the castle and view several dioramas depicting the story of Disney's 1959 film Sleeping Beauty. The voice of Cliff Edwards singing "When You Wish Upon a Star" is piped into it.[3] The original dioramas were designed in the style of Eyvind Earle, production designer for Sleeping Beauty, and were then redone in 1977 to resemble the window displays on Main Street, U.S.A.. The walkthrough was closed for unspecified reasons in October 2001; popular belief claims the September 11th attacks and the potential danger that ensued played a major factor in the closure.

On July 17, 2008, Disney announced that the walkthrough would reopen in the style of the original Earle dioramas, enhanced with new technology not available in 1957. It did so on November 27, 2008 at 5pm., drawing long lines going as far back as the Hub at the center of the park. Unlike previous incarnations, visitors who are unable to climb stairs or navigate the passageways can still experience the walkthrough "virtually" in a special room on the ground floor. This room is lavishly themed, and presents the closed-captioned CGI walkthrough recreation on a high-definition TV. This same virtual recreation is included on the Sleeping Beauty 50th Anniversary Platinum Edition DVD.

The Disney family's coat of arms hangs above the archway to the castle.[4] It is composed of three lions passant in pale.[5] It is known that the coat of arms was not originally on there, but was placed there sometime between June [6] and July 1965.[7]

At the rear of the castle, shaded by the archways and driven into the ground is a gold spike that is widely, but wrongly, believed to mark the geographical center of Disneyland as of the addition of Mickey's Toontown in 1993. In reality, it is a surveyor's mark that was used to ensure that the castle's drawbridge and entrance lined up with Main Street U.S.A. when the park was first constructed. The original geographical center of the park was in the middle of the round park, where the "Partners" statue stands. The addition of Mickey's Toontown moved the actual center of the park a few yards northward, but still on the hub side of the drawbridge.

In celebration of Disneyland's 50th anniversary in 2005, the castle was repainted and five turrets were decorated with stylized crowns, each representing a decade in the park's history.

For Disneyland's 60th Anniversary, World of Color changed to the World of Color: Celebrate! The Wonderful World of Walt Disney. The park introduced Paint the Night and a new fireworks show, "Disneyland Forever". A 24-hour kickoff event occurred May 22, 2015.

As part of the celebration, the castle was covered with diamonds and glitter, with a large 60th logo in the center.

Hong Kong Disneyland's Sleeping Beauty Castle was a nearly identical copy of the original in California. However, the two castles could be differentiated through very subtle details. If one were to look closely enough, Hong Kong Disneyland's castle was built with much more precision compared to Disneyland's. This could be observed through straighter and sharper edges on towers and walls as well as more ornate turret toppings. Hong Kong Disneyland also used a different color scheme compared to that of Disneyland, with natural white and pink for the accents and cornice, giving the castle a more medieval look while the original uses slightly more saturated colors for its cornice and decorations, giving it a more fairytale look. Disneyland frames its castle with lush trees and gardening to compliment its fairy tale aesthetic. Hong Kong Disneyland had less trees surrounding its castle, allowing a more open view to accompany the nightly fireworks show. While Disneyland did not begin its nightly fireworks tradition until one year after the park opened, Hong Kong Disneyland's was built with the firework performances in mind. This resulted in the fortress-themed buildings to the sides of the castle, which housed the Fantasyland dark rides, being much more extended to both sides compared to Anaheim's, allowing a much more panoramic view to the pyrotechnic display.

The park's current castle became completely redesigned and reconstructed in 2020, as part of its 15th anniversary celebration. The converted castle, called the Castle of Magical Dreams, was designed to pay tribute to all Disney Princesses, and the Sleeping Beauty Castle now becomes the lower base of the new castle. The castle closed on January 1, 2018.[8][9]

In celebration of Hong Kong Disneyland's 5th Anniversary, Celebration in the Air, unlike Disneyland, the castle has been transformed into Tinker Bell’s Pixie Dusted Castle. The castle is decorated by golden pixie dust, which sparkles and shimmers in the sun, and illuminates by night.

Although no significant decorations is added to the castle for the park's 10th anniversary, the nightly "Disney in the Stars" fireworks show is added with elaborate projection mapping with visuals to compliment the display. This, however, resulted in the elimination of a few pyrotechnic elements launched from the front of the castle during the show.

As a Disney icon, this castle and the Magic Kingdom's Cinderella Castle have become the basis for the logo of Walt Disney Pictures, Walt Disney Television, Disney Music Group and Walt Disney Studios Motion Pictures. It was also heavily featured in advertisements for The Wonderful World of Disney, formerly shown on the Disney Channel. 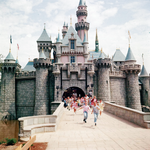 As seen on the Disneyland Explorer app