Sleigh Bells is an animated Oswald the Lucky Rabbit short released on July 23, 1928. The short was missing until late 2015, when a surviving print was rediscovered and restored by researchers, the British Film Institute (BFI), and the Walt Disney Animation Studios, respectively. In celebration, the short was screened for the first time since its release on December 12, 2015.[2]

Oswald plays the hockey champ, but gets distracted and flirts with Ortensia. 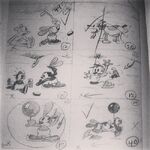 Retrieved from "https://disney.fandom.com/wiki/Sleigh_Bells?oldid=3712131"
Community content is available under CC-BY-SA unless otherwise noted.