Being rated out, his plans foiled, being fired

Slickwell appeared at the Enchancia castle for the kingdom's Jubilee with King Magnus. He gave Baileywick a cursed pin so Baileywick would be very clumsy with everything, ultimately retiring so Slickwell could steal his job. When Sofia and Clover found out about the cursed pin, Sofia told Clover to make sure Slickwell didn't get away, and Clover put the pin on Slickwell to give him "a taste of his own medicine." When Sofia told her parents and the adults about Slickwell's plot against Baileywick and the cursed pin, everyone was furious. Slickwell told King Roland he couldn't be fired because he worked for King Magnus, but that was until Mangus himself stepped forward and instantly fired him. Slickwell was escorted to the castle gates by the guards and thrown out before vowing to return, remaining colossally clumsy because the pin was stuck on him. 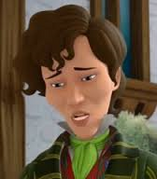 Retrieved from "https://disney.fandom.com/wiki/Slickwell?oldid=1558709"
Community content is available under CC-BY-SA unless otherwise noted.