Cave of Neptune in Neverland

Being separated from his mother and friends, Captain Hook

Slink first appeared in the episode "Cubby's Pet Problem" while Stormy was showing the wonders of the Never Sea to Jake and his crew when they reached Cave of Neptune. Slink quickly took a liking to the puny pirate crew, following them back to Pirate Island much to their surprise. They chase after the baby sea serpent all over the island, until they manage to capture Slink by playing his favorite game, Fetch. While Jake, Izzy, and Skully prepare Bucky to find Slink's mother, leaving Slink in Cubby's care, Sharky and Bones kidnap Slink for Captain Hook, who plans to use Slink as the main attraction of his seaside petting zoo. Quickly leaping into action, Cubby sneaks aboard the Jolly Roger to rescue Slink, succeeding with the aid of Jake, Izzy, Slink's mother, and a bit of pixie dust. 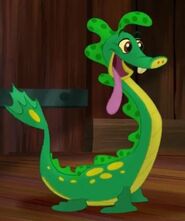 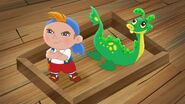 Add a photo to this gallery
Retrieved from "https://disney.fandom.com/wiki/Slink?oldid=4054116"
Community content is available under CC-BY-SA unless otherwise noted.