Cave of Neptune in Neverland

Slink (son)
Slink's Mother is a minor character from Jake and the Never Land Pirates. She is a giant sea serpent who lives in the Cave of Neptune at the bottom of the Never Sea with her baby Slink.

While Jake and his crew were exploring the wonders of the Never Sea with Stormy they reach the Cave of Neptune when they hear Slink's Mother roar mistaken it for Slink on their first meeting. Not wanting to invoke the rage of Slink's mother, they decide to return to Pirate Island unknown to them that the baby sea serpent has followed them back to the island and later gets captured by Sharky and Bones as the main attraction of Captain Hook's petting zoo. Slink's Mother appears later in the episode thanks to Stormy to prevent Hook and his crew from escaping with her baby. 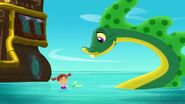 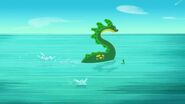 Retrieved from "https://disney.fandom.com/wiki/Slink%27s_Mother?oldid=2934644"
Community content is available under CC-BY-SA unless otherwise noted.