Slobbers are one of the strongest enemies in Epic Mickey, the first you encounter is a sort of Mini-Boss, but the others appear as regular enemies. According to Gremlin Gus, when Mickey encounters one of these, it means that the Blot really wants to stop him. It is first seen in the Tomorrow City Exhibit, on the purple platform behind the curtain. When you see it, it roars and tries to throw Thinner at you. It will slash or smash you if you get close to it.

The Slobber has three forms of attack: up-close melee, thinner blasts, and a giant inhale. The only way to cause damage to the beast is to wait for it to try and inhale Mickey, then pump it full of paint or thinner.

If you have 2 guardians, try using them. Use 2 Tints to befriend it, or use 2 Turps to defeat it. 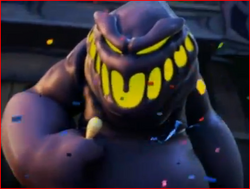 Deloris the Slobber, is the first Slobber you encounter in Epic Mickey 2: The Power of Two. If Deloris is befriended with paint, she will leave and go to live in Blot Alley. She is given her name by Ghost Ian, which he gives to her after you befriend her.

Despite her appearance, she is presumed to be female due to her name, and being referred to as a 'she'.

If befriended, she will appear in the ending during the parade celebrating Oswald's and Mickey's heroic deeds, and she is shown happily offering an Ice Cream Cone to one of the toons.

The first Slobber that you encounter

That same Slobber trying to inhale Mickey
Picture0005.jpg
Mickey, a Slobber and a Splatter in Dark Beauty Castle

Retrieved from "https://disney.fandom.com/wiki/Slobbers?oldid=1391212"
Community content is available under CC-BY-SA unless otherwise noted.