A small old donkey with white mane and a right ear that never likes to stay straight up, handsome

One of The Boy's donkeys, one of the donkey workers

The Boy, The Father, The Three Merchants, Joseph, Mary

The Auctioneer, The Tanner

The Boy, The Father, helping the Boy and his Father with their work

The idea of having him sold to someone, people (and the Auctioneer) making fun of him, being skinned by the Tanner, and people hurting the Boy

Gets sold to a kind man named Joseph and helps him carry his pregnant wife named Mary to Bethlehem.

Donkey bray
The Small One is the protagonist of Disney's The Small One. He is a gentle miniature donkey past his prime. Long years of working hard have made him weak. Though he eats as much as the other donkeys, he cannot handle the same loads. He has a mental disability where his right ear never seems to stay straight up, giving him that "Disney cuteness" rating. He has strong feelings for the Boy and would give his life to help him, as he almost does at the Tanner's.

He lived with his young master in Nazareth. However, the boy was forced to sell him, but wanted to give him a good place to go. Eventually he sold him to Joseph and Mary as transportation to Bethlehem. Along the way when they arrived at the stable. The Small One was at the stable. 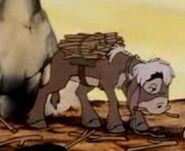 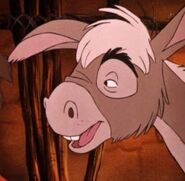 Small One carrying Mary to Bethlehem.
Add a photo to this gallery
Retrieved from "https://disney.fandom.com/wiki/Small_One_(character)?oldid=3723319"
Community content is available under CC-BY-SA unless otherwise noted.