Created by Danny Kallis, the series ran for three seasons on The WB Television Network from April 2, 1997 to May 16, 1999. The series was produced by de Passe Entertainment and Danny Kallis Productions, in association with Walt Disney Television.

The show (which is set in Washington, D.C.) centers on the misadventures of boy genius T.J. Henderson (Tahj Mowry), who at the age of 10 moves from elementary school and gets transferred to Piedmont High School, where he ends up becoming a high school sophomore with 15-year-olds as his classmates. He must adjust to the life with older but not necessarily wiser high school teenagers — his brother Marcus (Jason Weaver) and Marcus's best friend Mo (Omar Gooding). He often deals with the usual missteps of trying to fit in as a kid genius, while being a small kid in high school.

Older brother Marcus, the suave and underachieving middle child, also deals with teenage problems, such as finding a date, and doing homework (though he sometimes tries to get T.J. to do his homework for him). Their father Floyd (John Marshall Jones), a single father who owns his own roofing business, deals with the problems of raising his three kids, Yvette, Marcus and T.J. since his wife's death. Floyd's only daughter, and Marcus and T.J.'s older sister Yvette (Essence Atkins), is (usually) the level-headed one of the family and is the typical overachieving student.

Episodes deal with T.J.'s attempts to fit in high school, as well as the contrast between his smarts and his brother's underachieving nature.

The character of T.J. Henderson (whose full first and middle name was never revealed), played by Tahj Mowry. The youngest child in his family. He's 10-11 years old in seasons 1 and 2 (and 12 in season 3), and, as the title suggests, is smart, with an I.Q. of 180. He skipped from 4th grade to 10th, knows several different languages and has a photographic memory. Outside of the occasional moments of awkwardness that are bound to occur when a child interacts with high schoolers, T.J. has a peaceable existence in the school, and is eager to be involved in school functions.

So much so, that he becomes the mascot for his school basketball team, which leads to occasional bullying. T.J. later is promoted to being the equipment manager for the Piedmont High basketball team. He spends a fair amount of time at school with his older brother, Marcus, and T.J.'s best friend, Mo Tibbs. Although they have some tense moments, it is obvious that the two brothers care for each other deeply. Though T.J. spends much of his time around teenagers, he is occasionally seen spending time with kids his own age. T.J. plays keyboard for Marcus's band in several episodes after the other member broke his finger from an accident (and was also briefly the manager of the band in the episode "Achy Breaky Heart").

The character of Marcus Henderson, played by Jason Weaver, is T.J.'s older brother. He is fairly popular and reacts remarkably well to his younger brother sharing nearly every one of his classes, although tensions do arise from time to time (this is especially true in the pilot episode). He gets average (or below average) grades, simply because he does not apply himself. He's a forward on his school's basketball team and has several love interests throughout the run of the show, none of which are seen for more than one episode. He is the lead vocalist for the band which he created, Mackadocious (in which Mo is the bassist and T.J. is the keyboardist).

The character of Mo Tibbs was played by Omar Gooding. He is Marcus and T.J.'s best friend. It's been revealed that he was adopted and his birth mother is a fortune teller in Delaware name Shelia Ecks. Floyd is often annoyed with Mo's antics, such as eating from their fridge and sleeping in T.J.'s bed. He pretty much lives there and he hates eating at his own house (he once cracked a tooth off his mother's oatmeal). He works out and is very muscular. He plays bass guitar in Marcus' band, Mackadocious, and is a talented chef and barber. He is portrayed in the show as someone who is sometimes dimwitted and gullible. . A recurring catchphrase of his is, "Hello der!" ("hello there").

The character of Yvette Henderson was played by Essence Atkins. The sister of Marcus and T.J., Yvette is intelligent, (usually) level-headed and is a women's rights activist. She has a fake I.D. that says she's 28, as revealed in the season one episode "The Code". Yvette sometimes finds it hard being the only girl out of three males in the Henderson family, as seen in the season two episode "Men Working Badly". She is in 11th grade in season 1 and graduates high school at the end of season 3. After being rejected from Princeton, Yvette planned to attend Georgetown University as the series ends. Although the character of Yvette is in her late teens, Essence Atkins (who was born in 1972) is actually only ten years younger than John Marshall Jones, who plays her father.

The character of Floyd Henderson, played by John Marshall Jones, is the father of the family and owns a roofing business, called Floyd Henderson Contracting. Unfortunately, his wife Christina (as mentioned in an episode) died of a heart attack. After the loss of his wife, he would have trouble finding another woman to date. However, he does date in a few episodes: in season two's "Dateline", T.J. sets Floyd up on a date with a woman named Jamie (Jackie Mari Roberts), who T.J. gets jealous of after Floyd spends less time with him; and in the season three episode "Beating is Fundamental", he dates a woman whose son T.J. dislikes (and later punches). He is frequently a comic foil to most characters including T.J. He also gives good moral advice to all of his children (and even Mo).

The series was taped at Sunset-Gower Studios in Hollywood, California. The establishing shot of the fictional Piedmont High School later appeared on another Washington, D.C.-based Disney series, Cory in the House for the Disney Channel.

A majority of the show's scenes take place in the Henderson house or the school. Originally, most of the family scenes took place in the kitchen, with no living room area seen during the first season. The living room set when it was added in season two had a window and the front door at stage center, and the stairs and kitchen doorway at stage right. The kitchen set was scaled back as well with the back stairs that lead to the bedrooms removed. The layout changed again in season three with the kitchen remaining the same, but the living room layout changes including the front door now located at stage left. Marcus and T.J.'s bedroom is the only set to remain the same during the course of the entire series.

Piedmont High is the high school that Yvette, Marcus, Mo and T.J. attend. The four main sets seen in the show are the classroom, the hallway, the cafeteria and the auditorium. The hallway changes its layout twice during the series.

The theme song for the first and second seasons was produced and written by Kristian Rex who also scored the music for the entire second season. The theme song for Smart Guys's third and last season was performed by Hami and featured cast member Omar Gooding. A short version of the season three theme, which is different from the regular theme song was used in episodes in which ran over the allotted time.

The opening sequence for the first two seasons was fully computer animated with the exception of the cast video headshots. The show's title logo was shown at the beginning and again at the end of the sequence when the main characters (minus Mo) are shown above it. The season three opening titles were made to resemble a music video (the sequence was choreographed by Russell Clark).

Three months after Smart Guy was canceled on The WB, reruns began airing on Disney Channel in September 1999 and continued to air until December 2003, and again for a "Back to School" themed marathon on September 3, 2004. Smart Guy was aired on The N, Noggin's television programming block, from April 7, 2002 (along with Sister, Sister) until April 23, 2004.

The show was recently removed from the Canada-based Family Channel and was replaced by Wizards of Waverly Place in October 2007, though it is still on Disney Channel in the United Kingdom, but not on a recurring basis in the UK. In late 2006, the show started airing on Disney Channel in Australia and New Zealand. In 2006, the UK Disney Channel pulled the show, which at the time was only aired during working days in the early afternoon. 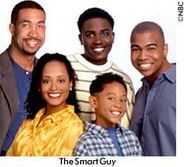 Retrieved from "https://disney.fandom.com/wiki/Smart_Guy?oldid=4087206"
Community content is available under CC-BY-SA unless otherwise noted.