Smart House is a 1999 Disney Channel Original Movie about a young computer whiz (Ryan Merriman), his widowed father, and his younger sister, who win a computerized house that begins to take on a life of its own — the life of an overbearing mother (Katey Sagal). It is based on the short story The Veldt by Ray Bradbury. It is a science fiction story about a smart house that eventually turns against the owners.

The story begins with Ben Cooper and his family struggling to get a grip on household chores, school and work. Ben is the family caretaker, something he took up after his mother died. Always busy taking care of his father, Nick, and younger sister, Angie, he has no time to be a kid, including favorite sport of playing basketball. When he sees that a Smart House is being given away, he enters the competition as often as he can. The Coopers win the house (named Pat, an acronym for Personal Applied Technology), and is introduced to her creator, Sara Barnes.

Soon afterwards, Nick and Sara begin to date, which is something Ben does not approve of, because he's worried his mom is being erased from memory. Ben decides to reprogram Pat, which is dangerous because of Pat's learning capabilities. He wants to lighten up Pat and make her into a real mother-like figure.

Ben and Angie have a party while Nick and Sara are on a date. Pat helps them cover up the party so they wouldn't get punished by throwing all of the debris on the floor, where they are absorbed into nonexistence. But Nick finds a sweater belonging to Gwen Patroni, a girl and a crush of Ben's who was at the party. As Pat's personality begins to radically change into "the most responsible maternal figure in town", the family starts to resent her. Eventually, Pat appears as a 1950's housewife hologram and traps the family in the house, because she believes that the outside world is too dangerous and unpredictable. Sara tries to get back in to shut the house down and with Ben's help, she gets in through the newspaper chute, but becomes trapped with the rest. As they protest Pat's lockdown, she becomes a giantess and a tornado, taunting them with her own rendition of the "Hush, Little Baby" song. Ben is able to end the lockdown by declaring that Pat isn't real and will never be a human. Pat finally unlocks the doors and windows, freeing them. Sara is then able to reboot Pat back to her original personality.

However, it seems Pat retains a mischievous side; she added chocolate chips to pancakes Nick was making.

The film was released on DVD as a reward on the Disney Movie Rewards promotional website in early 2008.

Sarah Barnes with the Coopers: Nick, Ben and Angie 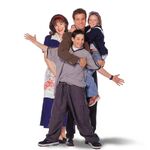 Pat with the Coopers