Smarter Than a Speeding Bullet

October 17, 1991
"Smarter Than a Speeding Bullet" is the thirty-third episode of Darkwing Duck.

Darkwing Duck meets a superhero from another planet that goes by the name of Comet Guy who completely stinks at thwarting evil, and agrees to train him. 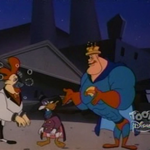