“I will never understand why you gravel crunchers want to jump out of a perfectly good airplane!”
―Cabbie before dropping off the Smokejumpers[src]

The Smokejumpers are an organization that fight against wildfires at Piston Peak National Park in Planes: Fire & Rescue.

In Planes: Fire & Rescue, they are first seen when Dusty Crophopper arrives at the Air Attack team's base. Upon hearing that Dusty is the SEAT member who Propwash Junction's fire truck Mayday radioed to the team about, Dynamite introduces herself and the other members to Dusty, and they all watch with Windlifter as Lil' Dipper introduces herself to Dusty. Later, they hear a report from Patch, the firefighters' informant, that there is a wildfire. The Smokejumpers prepare by collecting their parachutes before being carried by Cabbie to the wildfire where they jump out of him and use their parachutes. Upon landing, they dig a fire line to prevent the fire from spreading.

A few days later, the Smokejumpers join Dusty, Dipper, Windlifter, and Cabbie the following night to watch an episode of CHoPs (parody of CHiPs), which features Blade Ranger, the commander of the Air Attack team, fighting crimes with Nick Loopin' Lopez. The Smokejumpers enjoy the show, with Dynamite stating it as the best one when Cabbie comments that it stinks. When Dusty asks them why Blade was working as a firefighter after acting on TV, the Smokejumpers explain that it is a mystery and that they won't be asking Blade when it is his own business.

The next day, the team gets a report of several spot fires caused by lightning the previous night. While the Smokejumpers are digging a fire line beside one of the fires, the wind shifts and blows several of the sparks onto unburnt trees on the other side of the line. The Smokejumpers then get trapped as the fire blocks their safety zone, but are saved when Dusty pours fire retardant on the fire, allowing the Smokejumpers to proceed. When Dusty, Dipper, Cabbie, Windlifter, and Blade get back to the base after putting out the fires, they are told by Patch that the Smokejumpers are camping that night and will mop everything up the next day.

They are later seen, after finishing their job, watching as Windlifter lifts Blade down to the ground after Blade got damaged by a wildfire's heat while sheltering in an abandoned mine with Dusty. They all work together to help get Blade into a small hangar so that he gets fixed by Maru.

The next day, the Smokejumpers watch as Maru fixes Dusty, who got damaged and unconscious after crashing in the forest due to his gearbox giving out while redlining up a waterfall to scoop water so to save Harvey and Winnie. After Dusty wakes up five days later, the Smokejumpers were happy to hear that he is alive.

The Smokejumpers and the rest of the Air Attack team then travel to Propwash Junction to celebrate Dusty's bravery, along with him being certified by Blade to reopen the town's airport for the Corn Festival and later take part in an aerial show.

In Planes: Fire & Rescue: The Video Game, the Smokejumpers have the role of clearing debris off tourists' paths. Dynamite also gives out some of the info when the missions start. 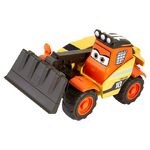 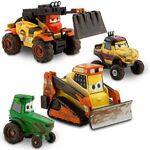