Cars On The Road (upcoming)

“You can't turn back the clock, kid, but you can wind it up again.”
―Smokey to Lightning McQueen

Smokey is a major character in the 2017 Disney•Pixar animated film, Cars 3.

Smokey's design is based on a 1947 Hudson pickup truck. He is painted orange, with areas of rust on his fenders and flatbed, which seems to have a patch of brown. He has blue eyes and yellow rims, and also carries the Smokey's Automotive Service logo on his doors.

Smokey was Doc's trainer when he was learning to race. While Lightning McQueen is recovering from his crash, he remembers this and wonders if Smokey can help him train to beat Jackson Storm. To this end, he and Cruz Ramirez travel to Thomasville, where they do a lap on the local racetrack, only to stop in their tracks to avoid colliding with Smokey.

Assuming the two cars were thirsty, Smokey invited them to the local pub, where they are introduced to Thomasville's other racing legends, Louise Nash, River Scott, and Junior Moon. Smokey and his friends then share anecdotes about their glory days, especially about Doc, whom they nicknamed Hud. Smokey recalled one race where Doc was up against an up-and-coming rookie who tried to slam him against the wall when he came close to passing, but Doc performed a daring flip right over the rookie, allowing him to win the race.

As Lightning laments how he wished to see Doc so happy, Smokey takes him outside, guessing he had an ulterior motive for coming to Thomasville and learned that McQueen had one last chance to beat Storm, least he end up like Doc. Smokey brings McQueen to his garage, explaining how Doc became emotionally detached after his forced retirement and exiled himself to Radiator Springs, cutting himself off from all his friends for the past fifty years. He then reveals a collage of letters and newspaper clippings of Doc sent after becoming McQueen's crew chief, remarking that as much as Doc loved racing, mentoring McQueen was the best thing that ever happened to him.

After observing McQueen perform another lap at the track, Smokey informs him that while he may not become as fast as Jackson Storm, he can be smarter than him. He reminds McQueen of how he managed to survive Thunder Hollow's demolition derby unscathed, all because he wasn't overthinking things. Figuring McQueen needed a sparing partner, Smokey has Luigi and Guido remove Cruz's muffler so she'd sound like Storm, and, as McQueen would be set up in last place for failing to show up at the qualifier, he had McQueen try to catch up to Cruz in three laps. Additionally, Smokey taught the two how to "sneak through the window" amidst a herd of tractors, drafting and how to dodge to keep their reflexes up. Ultimately, as the deadline for Florida International loomed, McQueen had failed to catch Cruz and was forced to depart for Florida.

Smokey subsequently joined McQueen in Florida as his crew chief and coached him as he started working his way up the ranks. However, early in the race, McQueen decided to substitute Cruz into the race to give her first chance at being a racer. Though Sterling tried to protest the legality of this action, Smokey pointed out that technically the rules stated a racing number is required, not the car who wears it.

Smokey proceeded to coach Cruz, who was struggling to catch up, reluctantly relaying McQueen's motivational advice to boost her confidence, ultimately conceding his position to McQueen after refusing to tell Cruz about "crabbies going night-night". Subsequently, when McQueen tells Cruz to "sneak through the window", Smokey exclaimed he understood that sentence.

When Cruz wins the race and refuses to race for Sterling in favor of Tex Dinoco, Sterling reminds McQueen of their deal in which he retires if he didn't win the race. However, Smokey directed their attention to the leaderboard, showing both McQueen and Cruz as the winners, since both he and Cruz raced with the winning number, thus winning the deal.

Smokey is confirmed as a playable character in the game.

Smokey in Cars 3: Driven to Win 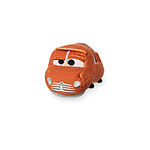