Playing, swimming freely through the Never Sea, helping his friends

Captain Hook
Snappy is a little hermit crab that inhabits pink and purple spotted seashell. He is also good friends with Marina and Stormy.

Snappy first appeared in the episode The Old Shell Game After thwarting Captain Hook's plan to steal the shell from the sea pups. Jake and his crew return to Pirate Island, where they learn the shell was the home of a Hermit Crab, so Izzy set him free.

Snappy makes a brief cameo in the episode "Captain Who?" as Jake and his crew tries to restore Captain Hook's memory. Snappy makes a brief appearance at the end of "Treasurefalls!" retrieving Cubby's lost Skull-N-Bones marble from the bottom of Never Sea, and returns it back to Cubby.

Snappy reappears in the episode "Jake's Royal Rescue" rehearsing a song with Sandy the Starfish and Stormy in Queen Coralie honor held at Hidden Cove. After Queen Coralie is rescued by Jake and his crew from Captain Hook and return to Hidden Cove, Snappy can be spotted successfully singing with Sandy, Marina, Stormy, and the mermaids. 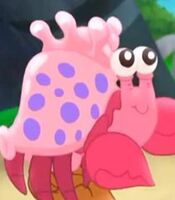 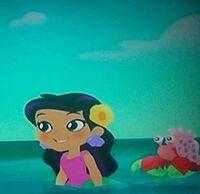 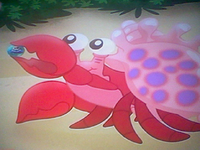 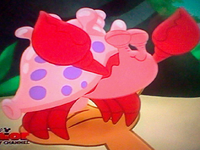 Retrieved from "https://disney.fandom.com/wiki/Snappy_the_Hermit_Crab?oldid=4095176"
Community content is available under CC-BY-SA unless otherwise noted.