The grotto is comprised of statues of Snow White, the seven dwarves, and a few woodland creatures. Snow White is standing at the top of a cascading waterfall. There is a bridge and walkway in front of the waterfall as well as a wishing well (the proceeds of which go to local children's charities).The statues were donated anonymously to Walt Disney, and he was determined to incorporate them into the park. The only problem was that whoever made the statues made Snow White the same size as the dwarves (which she is not).

Walt Disney Imagineer John Hench used the optical trick of forced perspective to make the statues work. He put Snow White at the top of the waterfall with a Disney-made small deer and put the dwarves close to ground-level, making Snow appear to be further away, and thus smaller. One rumor as to the origin of the statues is that they were "a gift from an Italian sculptor that had never seen the film, but owned a set of soaps in the form of the princess and the dwarfs. Unfortunately, Snow White was the same size as the dwarfs in the soap set, so the sculptor made her that way."

Singing was added to the grotto inside the wishing well in 1984 with the opening of new Fantasyland, and it is the voice of Adriana Caselotti, the original voice of Snow White. She sings the song "I'm Wishing" whenever anyone throws a coin into the well. 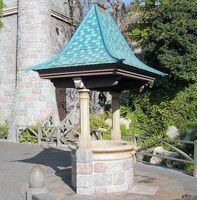 Wishing Well
Add a photo to this gallery

Retrieved from "https://disney.fandom.com/wiki/Snow_White_Grotto?oldid=4329244"
Community content is available under CC-BY-SA unless otherwise noted.