Disney Wiki
Register
Don't have an account?
Sign In
Advertisement
in: Musicals, Snow White and the Seven Dwarfs
English

Snow White and the Seven Dwarfs (better known as Snow White Live) is a stage musical based on the 1937 animated feature film. It premiered at Radio City Music Hall in 1979, and is known for saving it from being torn down. It starred Broadway stage veteran Anne Francine as the Evil Queen, Richard Bowne as the Prince, and Mary Jo Salerno as Snow White, and was directed and staged by Frank Wagner and produced by Robert Jani. It was televised on HBO in 1980 and on the Disney Channel in 1987. A cast recording was released in 1979.

The musical opens with narration that tells of a beautiful Queen sitting by the window watching the falling snow and thinking to herself, "Would that if I had a daughter with skin as white as snow, hair as black as the raven's crest, and lips as red as cherry wine." Soon she gave birth to a daughter who was the very essence of her wish and named her Snow White. After the Queen died, the King became lonely, and after many years, he took a new Queen from the far-off land of Shi-tan so that Snow White would have a mother in her life.

The kingdom is celebrating the marriage of the King and his new Queen. She has brought with her lady-in-waiting, Luna, and her personal huntsman. When Snow White makes her entrance, the Queen notices that the King loves her very much. She then lies to him that they must arrange for the safety of the rest of her subjects back to her homeland in order instead of sharing the first dance with him. In her chambers, she summons the slave in her magic mirror and asks, "Mirror Mirror on the wall, who is the fairest one of all?" It is reluctant to answer, but after much persuasion, it says that Snow White has far outshone the Queen's beauty. She then summons Luna before her to take Snow White to the ramshackle village far beyond the Kingdom and see to it that she is dressed in rags and forced to do heavy work and backbreaking labor until her beauty is destroyed. Luna agrees to do so and takes Snow White, who is oblivious to the scheme. Time passes in the village, where hard labor has done everything but destroy Snow White's beauty. She makes friends with the women of there and tells them of her wish to find true love. Just then, a traveling prince from the neighboring Kingdom of Heart hears her singing and falls in love with her instantly. But she flees to her house where she watches him from afar. Back at the castle, the Queen finds out Snow White remains more beautiful than her. She decides to summon her huntsman, and instructs him to go to the village and tell Snow White he has come to take her home to her father, and to take her into a secluded glade in the forest, kill her, and bring back her heart as proof that the deed had been done. The huntsman, not wanting to suffer a fate worse than death, reluctantly agrees to do so. But he can't bring himself to kill Snow White and tells her of the Queen's jealousy, to run into the forest, and to never return to the castle. After her flight through the forest, she encounters the forest animals who take her to a cottage deep in the forest. When she discovers what a mess it is, she decides to clean it in hopes of winning favor with the owners. In the diamond mines, the owners of the cottage are preparing to return home. They are seven dwarfs: Doc, Happy, Sneezy, Grumpy, Bashful, Sleepy, and Dopey. Upon seeing that someone is in their house, they think it is a monster, so they go up to their bedroom to kill it. But when they see that it is a beautiful girl, they find she is no harm to them, except Grumpy (as he says). Snow White wakes up, sees them, and tells them about herself and of her stepmother. They agree to let her stay if she keeps the house for them while they work in the mines.

The prince returns to the village. Learning about what happened to Snow White, he and the huntsman go to tell the King. Meanwhile, the Queen finds out Snow White is still alive, so she decides to take matters into her own hands. She goes deep into the dungeon and concocts a magic potion. She drinks it, which transforms her into an ugly old hag. She then decides to kill Snow White with a poisoned apple, of which she would have to take one bite and fall into the Sleeping Death. In the King's chambers, he becomes very worried, but the prince and the huntsman tell him of the Queen's jealousy and her plans for Snow White. He orders Luna to be brought before him and decides to throw her in the dungeon to rot there for the rest of her days. The prince then races to find Snow White before the Queen does. Back at the cottage, unaware of the Queen's plot, Snow White, and the dwarfs dance and tell stories, and she tells them of her wish for the prince to find her. The next day, the dwarfs go to the mines and tell Snow White not to let anyone into the house. When they finally leave, the hag appears and tempts her with the poisoned apple, telling her it will grant any wish her heart desires. She believes the hag, bites into it and falls to the ground in a deathlike sleep. At the mines, the forest animals warn the dwarfs of the Queen. They then chase the hag to the top of a cliff. She threatens to crush them with a boulder, but a bolt of lightning splits the ledge and she is hurled to her death at the bottom of the chasm.

The dwarfs find Snow White seemingly dead on the floor, so they build a glass coffin and lay her in it. They watch over her until the prince finally finds her. As he opens the coffin, he leans in to kiss her for the first and last time. But then she wakes up alive, the spell having been broken. The dwarfs dance with joy as Snow White and the prince are married. She is reunited with her father, and she thanks the dwarfs for everything they have done for her. She and the Prince then ride up to his castle.

Bring back her heart!!!!

I shall go myself...in disguise

"Will I ever see her again"

"Someday my prince will come"

The witch tempts Snow White with the apple

So beautiful even in death...

And they lived happily ever after

Program for the show's tour stop in Chicago. 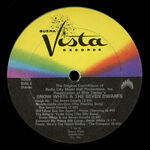