Very little is known about Snowball, except that he appears to be a breed of draft horse, built as muscular, and hulking. He is loyal to his master, however, and can't be considered truly evil as he does not have a human-based personality like other animals in Disney films are sometimes seen to have, although he does always appear to have an angry snarl on his face, hinting that he does have some sort of dark personality.

In the audio commentary of the DVD, film directors Kirk Wise and Gary Trousdale and film producer Don Hahn revealed the name of Frollo's horse to be Snowball.

Snowball appears only a handful of times in the film. During the opening scene, he is with Claude Frollo chasing after the gypsy woman who is holding baby Quasimodo. In one scene, he gives a harsh glare to Phoebus' horse, Achilles. When Phoebus rebels against Frollo at the windmill, Esmeralda throws a stone at Snowball's butt thrusting Frollo off, then Phoebus steals Snowball in order to escape. He is immediately recovered by Frollo after Phoebus is wounded and thrown off the horse.

It is not known what happened to him after his masters death. 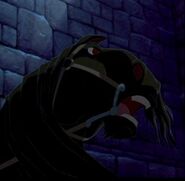 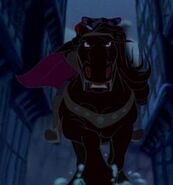 Snowball in pursuit of Quasimodo's mother