Frozen Ever After (upcoming)

Tiny armless snowmen each made from four balls of snow

Move in with Marshmallow at Elsa's Ice Palace
The Snowgies (also known as Snow-Babies) are tiny, mischievous snowmen that were created by Elsa when she became ill. They are created every time Elsa sneezes. They debuted in the short Frozen Fever.

The Snowgies are created as Elsa starts sneezing. The more Elsa sneezes, the more Snowgies appear. The Snowgies then go to the castle, where they cause some mischief. Luckily, Kristoff and Olaf manage to get them to behave and even have them perform a surprise for Anna. After a wonderful birthday party, the Snowgies get taken by Kristoff, Sven and Olaf to live in the ice palace with Marshmallow.

The snowgies move in with Marshmallow. 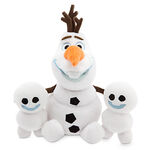 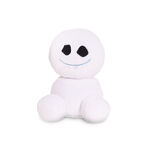 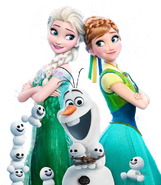 Sketches of the Snowgies in early production

Retrieved from "https://disney.fandom.com/wiki/Snowgies?oldid=1799775"
Community content is available under CC-BY-SA unless otherwise noted.