Rebel Pilots (1)
Gunners (1)
The T-47 Airspeeder  (better known as the Snowspeeder) was a specially modified combat airspeeder that appears in the Star Wars universe.

Used by the Rebel Alliance, this speeder was used during the Imperial assault on the ice planet Hoth. While Rebel pilots stood no chance against walkers, Rogue Squadron's snowspeeders delayed the Imperials long enough to allow the Alliance's leaders to escape.

Snowspeeders are heavily modified Incon T-47 airspeeders. Designed for low atmospheric duty, they are powered by a pair of repulsorlift drive units and high powered afterburners. The drive units' circuitry is left exposed to allow Rebel technicians easy access for repair and maintenance. Mechanical braking flaps located above each repulsor engine assist in maneuvers. Snowspeeders can reach speeds in excess of a thousand kilometers per hour, with an effective combat speed of about six hundred kilometers per hour. They lack sheilds but are small, compact, and fast: they are hard to target and rely on this maneuverability for survival.

For combat duty, snowspeeders are fitted with heavy armor plating and twin laser cannons (one on each side of the cockpit). The harpoon gun with its tow cable is a standard tool on most T-47s and normally is used for retrieving and hauling repulsor-assisted cargo barges.

A snowspeeder seats a pilot and a gunner, sit back-to-back. Computerized targeting systems allow the gunner to target the forward laser cannons, although the pilot can choose to handle them.

The Rebel Alliance pioneered an innovative combat maneuver for the Battle of Hoth. Suspecting that the Empire would use walkers against the Rebels, Rogue Squadron commander Luke Skywalker and Alliance tactician Beryl Chiffonage devised the harpoon and tow cable approach by which a single tow cable, wrapped several times around a walker's legs, could trip and disable the massive Imperial war machine. Since walker armor proved impervious to the snowspeeders' laser cannons, this tactic, first demonstrated by Alliance pilot Wedge Antilles, proved the only reliable way for small airspeeders to topple Imperial walkers.

The Alliance's technicians faced difficulties adapting the vehicles to the cold of Hoth. Additional repulsor-coil heaters had to be added to prevent the motors from freezing, and deicing nozzles had to be mounted beneath the mechanical braking and turning flaps. 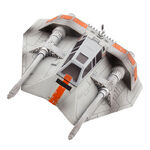