Clan Ishimura
Sora is a minor character from Disney's Gargoyles. She is a gargoyle and second in command of Clan Ishimura.

For most of her life, Sora lived peacefully in Ishimura with her clan, fighting the occasional criminal who dared to attack the town. However, in 1996, the Avalon travelers found themselves in her town, and guests in the clan's temple. That day, she and her clan were kidnapped and placed in a gargoyle theme park.

She and her clan decided that they did not wish to live in the theme park, but Taro attempted to force them to stay. Yama challenged him to individual combat, and defeated him. As a result, Sora and the rest of her clan escaped to their home.

When discussing Yama's punishment for betraying the clan, Sora suggested that he be his own judge. When she and Kai delivered the news to Yama, she begged him to ask her to join him, but he refused. She lamented the loss to their relationship.

Like most of the Ishimura Clan, Sora has black hair and two sets of horns, a shorter set of brow horns and a longer set on the forehead, She also has a forked tail. Perhaps her most unusual physical feature is her reduction of digits. Her dark purple wings seem to lack the ribbing typical in gargoyle wings and she only has two toes on each foot, as opposed to the typical three. 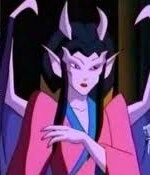