Disney Wiki
Register
Don't have an account?
Sign In
Advertisement
in: Article of the week, Objects, Magical Objects,
and 13 more

Magical use, supplying Yen Sid and Mickey with magical wizardry

Grants its wearer access to magic spells and abilities

The Sorcerer Hat is a magical article belonging to Mickey Mouse’s master, Yen Sid. First appearing in 1940’s Fantasia, the hat holds cosmic power capable of creating beauty and spectacle. The hat can be worn by anyone, but those who cannot control its magic can severely endanger both themselves and the world around them.

In the Fantasia segment The Sorcerer's Apprentice, the sorcerer hat makes its first appearance with Yen Sid wearing it as he worked on some spells. While Yen Sid is asleep, Mickey puts the hat on, its magical energy absorbing into his blood. He then uses the hat to cast a spell on a broom so that it may do the chores for him. He then falls into a deep sleep himself, dreaming of using the magical energy within to create shooting stars and crashing waves of ocean water. But Mickey soon finds himself unable to use the hat's power to stop the broom (and later brooms) from causing a flood. And in the aftermath of the mess Mickey caused while using it, Mickey gives the hat back to Yen Sid as he was not ready to wield its incredible energy at that time.

The segment was later reused in the sequel, Fantasia 2000.

In "Goofy for a Day", Mickey wears the hat at the beginning of the episode, since being a show host isn't easy.

In "Mickey and Minnie's Big Vacation", One Hundred and One Dragon's act sets fire to the club and Mickey uses the hat to summon the Magic Brooms to put it out.

In "Pete's Christmas Caper", Pete steals the hat from Yen Sid and uses its power to summon the Magic Brooms, ordering them to steal everyone's Christmas presents.

In "Mickey's House of Villains", Mickey uses the hat's power to battle Jafar during the climax. After deflecting several hat-induced attacks from Mickey, Jafar knocks the hat off of Mickey's head, but Aladdin comes to the rescue and gives Mickey the lamp which sucked Jafar in.

In the episodes "The Friendship Team" the hat's design was put in the form of a party hat as homage to Mickey's first feature.

The Hat makes a cameo appearance in Mickey's 60th Birthday. The hat was used by Mickey Mouse when he uses the magic and fixes all the mess on stage that Roger Rabbit caused. It was later used by a Sorcerer (who was not Yen Sid) named The Wizard, when he told him not to use it and warned him to use his own magic instead of someone else's, he uses the hat and his magic powers to put a spell on Mickey.

A painting of Minnie Mouse wearing the hat can be seen in the episode "House Painters".

The hat can be seen twice during the episode "Hats Enough": It is first seen among many other hats in a shop. Mickey later wears the hat (alongside his outfit from Fantasia) while searching for a hat, only to discard it when a flood appears magically.

In the episode "Cedric's Apprentice", Princess Sofia wears a similar shaped hat in glittery purple while learning magic beside the royal sorcerer Cedric for her sorcery test at Royal Prep. Sofia's sorcerer hat wouldn't be seen again until the second season in "The Enchanted Feast" whereupon looking into Morpho Mirrors, Sofia could see different reflections of herself wearing different outfits, including her sorcerer robes and hat.

During the end credits in The Hunchback of Notre Dame , the sorcerer hat can be seen in between of "Scene Planning" and "Producing Coordinators" credits list. The hat also makes a cameo in the sequel as one of Sarousch's objects.

The hat makes a cameo appearance in the Tangled: The Series episode "Keeper of the Spire". When Rapunzel and Calliope make it to the vault at the top of the spire, the hat is seen among other familiar objects from the Disney Universe.

The hat can be briefly seen in the Amphibia episode "Reunion", among the objects in Sasha's room.

In a scene after the credits, the hat is seen in the room where Horvath picks up his own hat.

The Sorcerer's Hat has become an obsession for Rumplestiltskin in the Enchanted Forest, he was able to possess it through getting Anna to face up to her darkness when he threatened to lock her up in a tower and this would mean she would never see her sister Elsa again, so she was going to kill Rumpelstiltskin but her love of Elsa made her do the right thing and a tear from her eye was collected on the dagger so Rumpelstiltskin could use it but Anna managed to get hold of his Dagger and force him to give her the hat after he was bitten by the Apprentice and in Storybrooke, Mr. Gold has the item in possession and has gone to great lengths to use it, with the Apprentice being his first victim by sending him into the hat's vortex. It is later discovered that Elsa. When Ingrid (now Sarah) in Storybrooke saw Gold with the Sorcerer's Hat, he told her that he has the leverage that she wanted.

Gold would later use the Sorcerer's Hat on Emma in order to take her powers away but was thwarted by Elsa before it could happen, which was followed by using it successfully on the fairies while they were trying to come up with a spell to stop The Snow Queen from enacting the Spell of Shattered Sight on Storybrooke. Gold hoped that by absorbing magic from others, this would free him of the Dark One's Dagger and escape Storybrooke. Just as he almost succeeded in doing so, Belle saw through his deception and used the dagger on him, which resulted in his exile from Storybrooke leaving behind the Sorcerer's Hat.

Due to Gold's manipulations, not only were the fairies released, but the powerful demon Chernabog as well. At that point, it was revealed that the hat could only suck in magical beings once. An annoyed Emma compared the hat's ability to trap magical beings to the chicken pox.

With the help of the Blue Fairy, the Apprentice is released.

A giant replica of the Sorcerer's Hat was built in 2001 and until 2015 served as the symbol of the park. Disney confirmed that it was to be taken down in October 2014 and dismantling started on January 7, 2015.

The hat appears prominently throughout the 4D film Mickey's Philarmagic. Here, Donald Duck accidentally loses the hat and goes on an adventure through several Disney musical numbers to get it back.

The hat appears on a shelf in a dressing-room used by Mickey Mouse for his magic-shows.

The hat appears in the queue for Star Tours in a piece of luggage passing by G2-9T. As the hat is checked, the Goose Droid makes a comment about how he got a job at Star Tours when he apprenticed.

The hat makes two cameo appearances in this attraction. The hat appears on a table nearby John's daughter in the 1940s sequence and there is an abstract portrait depicting Sorcerer Mickey in the dining-room.

The Sorcerer's Hat appears in this game and its history is elaborated on. It is revealed that Yen Sid received his hat during his own training in the magical arts and a new star appeared on the hat whenever he learned new magic. His newest apprentice (the Player) also uses this hat to aid in stopping the Noise from overtaking the Realms of Fantasia. Scout, another of Yen Sid's apprentices also has her own Sorcerer's hat though hers is a variation in the form of a cap instead.

The Sorcerer's Hat appears in the Epic Mickey franchise however it has no role to play in the plots of any of the games.

The Sorcerer's Hat appears in the Kingdom Hearts franchise however it has no role to play in the plots of any of the games.

Mickey and the Sorcerer Hat.

From film The Sorcerer's Apprentice

The hat in Once Upon a Time

Sorcerer Hat in the end credits of The Hunchback of Notre Dame.

The hat in Tangled: The Series

A Painting of Minnie wearing the hat in "House Painters"

The hat in Amphibia.

Molly McGee with the Hat in Chibi Tiny Tales. 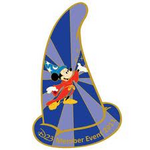 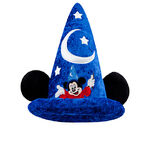 The Sorcerer Hat at Disney-MGM Studios

The hat is featured in one Disney Channel ident from the 1980s, where Mickey is trying various hats on a silver ball 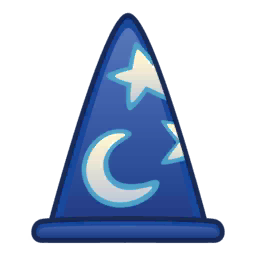 The Sorcerer Hat as an emoji in Disney Emoji Blitz.