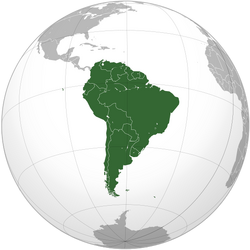 South America is a continent in the Western Hemisphere. The largest country is Brazil and the most populous city is Sāo Paulo. It is the fifth largest continent in the world and has many well known landscapes, such as the Andes, the longest mountain chain in the world and the Amazon Rainforest. South America is one of the most biodiverse continents in the world; home to several species of animals, such as jaguars, monkeys, anacondas, llamas, piranhas, parrots, condors, tapirs, pumas and anteaters. The Amazon Rainforest alone contains half of all the species in the world.

Ellie's map in Up

Retrieved from "https://disney.fandom.com/wiki/South_America?oldid=3809873"
Community content is available under CC-BY-SA unless otherwise noted.