This article is about the Mickey Mouse Clubhouse episode. For Phineas and Ferb song, see "Space Adventure".

Mickey and his pals travel into space to search for intergalactic treasure. But Space Pirate Pete is after the very same thing. Meanwhile, Toodles meets Space Pirate Pete's helper, Quoodles, and the two end up having feelings for each other bigger than any universe. 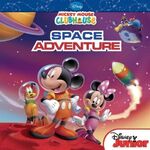