Space Mountain is a roller coaster attraction located in Tomorrowland at Disneyland at the Disneyland Resort in Anaheim, California. It opened on May 27, 1977, as the second incarnation of the Space Mountain concept, the first version having opened at Walt Disney World's Magic Kingdom in 1975. Unlike the Magic Kingdom version, Disneyland's version only features one track. From November 16, 2015 to June 1, 2017, the attraction operated as Hyperspace Mountain, a temporary seasonal overlay themed to Star Wars, placing riders in a starfighter battle between the New Republic and the Galactic Empire over the planet Jakku, one year after the events of the 1983 film, Return of the Jedi.

Between; 1998 and 2004, as part of the New Tommorrowland Project, all of Tommorrowland was given a Steam Punk look. This also means that Space Mountain was given a Copper looking paint job too, though the attraction itself remain the same?

Many minor additions were made to the ride over the years, including a synchronized soundtrack performed by Dick Dale. On April 10, 2003, Space Mountain was suddenly closed for a long-rumored refurbishment, which included replacing the original track except from the back end of the station to the top of third lift, storage and spur tracks were retained. As evidenced by the weld marks on these two track sections where the original and new tracks were joined together. Updating the effects and sound track. The exterior was also re painted back from Copper to it's original White colour scheme. Space Mountain soft opened on July 1, 2005, and officially reopened two weeks later on July 15, two days before the 50th anniversary of Disneyland.

Guests enter through a ramp that takes them to an outdoor concourse. Once guests navigate the queue they approach the merge point where safety videos play on a loop. Before guests enter the hallway a picture depicting Space Station 77 is on display.

From January to April 2007, the Disneyland Resort held the "Rockin' Both Parks" promotion, in which Space Mountain and California Screamin' both had their soundtracks changed to songs by Red Hot Chili Peppers. While California Screamin' received no special effects and was unchanged other than the new soundtrack, Space Mountain had significant changes. LED concert lighting was added along the tracks of the ride, which made much of the track and interior of the mountain visible, in contrast to the almost-pitch darkness normally found in Space Mountain.

The Rockin' promotion did not return in 2008.

For Disneyland's Halloween Time promotion in 2009, Space Mountain was converted to Space Mountain Ghost Galaxy, which had already been running at Hong Kong Disneyland's Haunted Halloween every year since 2007. Ghost Galaxy uses projections of an enormous ghost chasing riders throughout the mountain. This overlay was extremely popular with guests, and finding a wait time of 120 minutes or longer was not uncommon.

On November 14, 2015, a Star Wars-themed overlay known as Hyperspace Mountain debuted as part of "Season of the Force"—an event celebrating the release of Star Wars: The Force Awakens. The overlay featured a soundtrack with selections from John Williams's score of the Star Wars films, with projections depicting a mission towards the planet Jakku (a site introduced during The Force Awakens) to investigate the presence of an Imperial-class Star Destroyer as commanded by Admiral Ackbar, flight through a hyperspace jump and battles with X-Wings and Tie fighters.[1][2][3] The overlay was temporarily removed on September 6, 2016, for the Ghost Galaxy recreation. The overlay was brought back the following November then was removed again on June 1, 2017. It was brought back again for a Disneyland After Dark Star Wars-themed event on May 4, 2018, which then got removed on June 3 of that year. 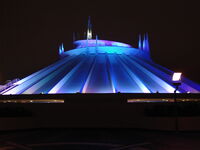 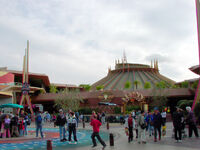 Space Mountain Colour, following the 1998 Tomorrowland update. It was repainted white in 2003.

Space Mountain's cameo in the Mickey Mouse Short, Space Walkies
Add a photo to this gallery 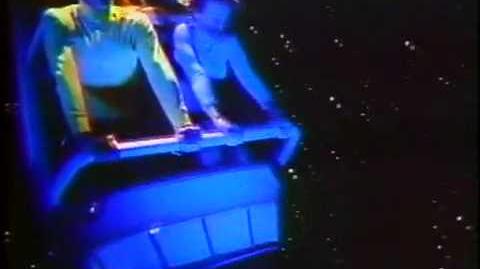 Vintage Disneyland Commercials 5 TV Ads Are a Blast From the Past (VIDEO) - AOL Travel News2.flv 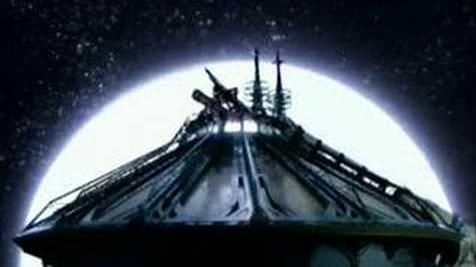 Retrieved from "https://disney.fandom.com/wiki/Space_Mountain_(Disneyland)?oldid=3706600"
Community content is available under CC-BY-SA unless otherwise noted.