Spaceship Earth is the iconic symbol of Epcot. One of the most recognizable structures at the Walt Disney World Resort, it is not only the centerpiece and main focal point of Epcot but also the symbolic structure and attraction that houses the fundamentals of the park. The 18-story geodesic sphere houses a 16-minute dark ride using the Omnimover system that presents the progression of human communications from cavemen to the dawn of the internet and beyond.

Spaceship Earth tracks the history of civilization through communication and innovation while offering guests an opportunity to write their future. The current version of the attraction is narrated by Judi Dench.

As guests depart, they begin their journey back into time in prehistory, where they witness ancient hunters battling a mammoth for its meat and fur. Entering a cave, a caveman shaman tells a story of the great hunt while artists paint images on a wall. Together this illustrates our beginnings with creating written language and through cave paintings, saving our ideas for future generations.

We then enter ancient Egypt where reeds are being pounded into papyrus, one of the earliest forms of paper. A pharaoh is also seen dictating a new decree to one of his scribes, with his hieroglyphic writings serving as an example of early written language.

As we enter ancient Greece, we first encounter a boat of Phoenician merchants selling their wares. To better allow for trade between several different civilizations with different languages, the Phoenicians created a common written language that would serve as the basis for our modern Alphabet. Within the Grecian city, we see one of their schools with a man teaching mathematical concepts to his students. Earlier versions of the attraction had the scene take the form of a Greek theater performance.

We then enter the Roman Empire, where Caesar is in the midst of a conversation with a chariot messenger. With the vast reach of Rome and its vast network of roads, messages carried by chariot would travel fast throughout the empire, though this prosperity would come to an end.

Passing through the collapse of the Roman Empire and the burning of the great Library of Alexandria, we learn that some if not all of their knowledge was fortunately saved by Jewish and Islamic scholars making copies of their books. Christian monasteries' efforts in copying books are also shown, with one monk scribe having fallen asleep at his desk from writing for so long.

With Gutenberg's invention of the printing press in 1456, the reproduction of books is made much easier and faster, thus kickstarting the Renaissance. We see books being read, artists at work creating paint, sculpting fine marble statues, and Michelangelo at work painting the Sistine Chapel ceiling.

Taking another leap in time, we enter the 19th and 20th centuries and the age of modern innovation and invention. A newspaper printing worker inspects a story at the end of the Civil War, with a nearby paperboy selling papers with a call of "Extra! Extra! Read all about it!" The rise of other new forms of communications can also be seen such as telegraph operators, a 1930s radio station, an office of telephone operators, a movie theater in the 1950s, and finally, a living room where a family watches the 1969 Apollo moon landing broadcast on television during the evening (as the young girl is seen wearing pajamas).

From here we enter the dawn of the computer age and travel through a mainframe computer room in the 1970s and the construction of personal computers in California garages in the 1980s by a figure strongly resembling Apple co-founder Steve Wozniak.

Passing through a tunnel of lights representing the dawn of the internet in our current time, we emerge out in space to see the Earth, reminding us of how small and yet interconnected our world is and how together, we can all shape the future and make a better world for all. The vehicles turn backward and begin their descent back down to ground level, the narrator instructing guests to remain seated to avoid any falls. Through screens in our vehicles, guests can answer a few simple questions to create their animated future vignette, utilizing photos taken at the beginning of the ride. As the short video concludes the narrator remarks that while we don't know what the future may hold, it is an adventure that we will all share, with guests disembarking into the Project Tomorrow post-show experience.

There have been four versions of the ride over the years.

The original version of Spaceship Earth debuted on October 1, 1982, on the opening day of EPCOT Center. Though there has been some disagreement over the years over who narrated the ride originally, the original narrator has since been confirmed to be Vic Perrin by WED Enterprises casting director Mark Eades [1]. This version of the ride ran until 1986.

Originally the ride had numerous effects that would be removed in subsequent years. These included fog effects in the ascension at the beginning of the ride. Additional animatronic figures such as an Egyptian worker standing on scaffolding, a boy assembling a type kit in the Gutenberg scene, and a woman in the network communications map scene.

When guests originally arrived at the Earth view scene, they passed by two communications satellites with astronauts working on repairs and then under a large space station with an animatronic woman at the controls. This scene would be mostly removed in the 1994 version to focus on the Earth view, with the space station partially disassembled and fully painted black to be hidden, the satellites were dismantled and discarded and the astronauts being sent to Space Mountain at the Magic Kingdom. The animatronic woman sitting in the space station was left intact however with her widow being blackened out and her animatronic coverings removed.

The second version of Spaceship Earth opened in 1986, featuring Walter Cronkite as the narrator. This version also featured the new theme song Tomorrow's Child, which served as the attraction's musical finale. Additional elements were tweaked including the removal of the accent fog machine and the addition of two new computer related scenes on the left side of the network communications area. These two scenes included a boy in his bedroom at a computer (the boy animatronic was moved from the type kit Gutenberg scene), and a woman working in a paperless office (woman animatronic was moved from the network communications map area).

Jeremy Irons, the voice of Scar in The Lion King, was the narrator for the third version of Spaceship Earth, which debuted in 1994. This version introduced scenes touching upon the future of communications technology with the advent of fibreoptics, video chat, and the world wide web.

The current version of Spaceship Earth officially opened in February 2008, after a soft opening in December 2007. Judi Dench is the English-language narrator. For the first time, the ride audio became multi-language so audio language can be chosen by the riders on each seat row. Rewrites and changes to the story would shift focus from just communication to the history of technology in general.

New scenes showcasing the early history of computers would replace the previous video chat scenes. The descent show scenes were removed or covered up, with the focus being put onto onboard screens that would allow guests to create their own future for an ending.

On February 25, 2020, it was originally announced on the Disney Parks Blog that Spaceship Earth would close on May 26, 2020 for refurbishment.[2]

On July 15, 2020, when EPCOT officially reopened, both "Spaceship Earth: Our Shared Story" and the sequences of Mary Poppins (attraction) were removed from the EPCOT Experience. When asked for comment, a spokesperson for Disney said, "As with most businesses during this period, we are further evaluating long-term project plans. The decision was made to postpone development of the 'Mary Poppins'-inspired attraction and Spaceship Earth at this time."[4]

Since 2021, the attractions have become part of World Celebration.

Spaceship Earth appears in both of the Disney Kingdoms Figment titles. While the first series ends on the image of Figment and Dreamfinder flying over it, the sequel goes into further details and establishes it as an enigmatic object of unknown origin that spontaneously appeared at the Academy Scientifica-Lucida's Florida campus in the 1980s. It has been tapped into as an energy source, but it has proven to be unreliable with occasional disappearances, with it vanishing again during a presentation by the Dreamfinder. The blame put onto him by the angry dean of the school ends up awakening his inner doubts as to the Doubtfinder. After this threat is defeated, Dreamfinder and Figment begin a new quest to search for it.

Earth Station, near the exit of "Spaceship Earth"

Project Tomorrow, near the exit of "Spaceship Earth"

A VIP lounge, operated by the pavilion sponsor, exists above the post-show area of Spaceship Earth. Employees of the current sponsoring company and their guests can relax in the lounge while visiting Epcot. The sponsor can also hold receptions in the space as well as conduct workshops and business presentations. When Spaceship Earth was without sponsorship from 2004–2005, the room was utilized for private events such as weddings and conventions. The layout is small and curved in shape, with one wall consisting of large windows where visitors can look out onto the park.

When Siemens AG took over as sponsor, the lounge was given the name "Base21." In 2012, the name was dropped and it is now simply known as the "Siemens VIP Center." In August 2017, Siemens left the lounge, and Disney took it over.

2021 Concept art for a new look of Spaceship Earth's Beacon of Magic at the World's Most Magical Celebration in Walt Disney World's 50th Anniversary celebration.

Spaceship Earth as the Death Star for a Rogue One promotional event. 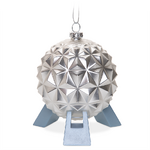