Sparks is a blue and silver robot toy and is one of the tertiary antagonists in Disney/Pixar's 2010 animated film Toy Story 3. He is one of Lotso's henchmen, but in the end, he is reformed.

Sparks is first seen shaking hands with Buzz and greeting Andy's toys at Sunnyside and later gambling with Lotso's gang in their secret hideout. He is later seen helping imprison Andy's toys and is seen for the remainder of the film patrolling Sunnyside. Sparks and the other henchtoys are eventually convinced of their leader's evilness and treachery and turn on him. He is last seen living happily at Sunnyside Daycare during the credits, after Lotso's defeat.

"Sparks will fly - literally - during electrifying playtimes with your new robot friend Sparks! This retro-inspired toy has flashing red LED eyes and a blaster cavity that actually spits out real sparks when he's rolled along on his sturdy rubber wheels. Sparks also sports telescoping arms with working pincers, and an elevator action that raises his entire body to new heights. Sparking action completely child-safe. Requires two AA batteries (not included)."

Sparks is a robot toy at Sunnyside Daycare. He has shown to be both blunt and sarcastic. Sparks' retro design has flashing red LED eyes and a blaster cavity in his chest that spits out real sparks when he's rolling around on his wheels (but is completely safe for children). He sports telescoping arms with working pincers and he can also elevate his body to make himself taller.

When Andy's toys first arrive at Sunnyside, he shakes hands with Buzz Lightyear. He starts out as one of Lotso's henchmen, but in the dumpster scene, when Ken states that Lotso put all of the toys in Sunnyside Daycare into a pyramid and placed himself on the top, he and Twitch (and likely Chunk as well) start to doubt Lotso's leadership as both of them look at each other. Both of them are also in shock when Lotso shows his true colors and pokes Big Baby angrily in the stomach. They also witness Big Baby who retaliates by throwing Lotso into the dumpster, and he and the rest of his fellow henchmen let Andy's toys escape. In the end, he and the rest of Lotso's former henchmen reform for the better and become nicer.

Sparks elevating himself up

The real life toy version of Sparks by Thinkway Toys 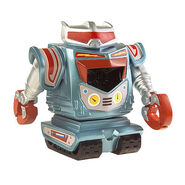 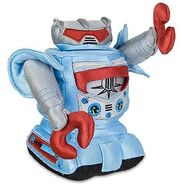 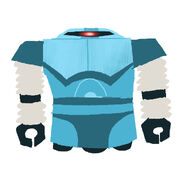