Brought back to life by his owner Victor
Sparky is Victor Frankenstein's pet dog and the central figure of Tim Burton's 1984 live-action short Frankenweenie and the deuteragonist in its 2012 animated feature film of the same name.

In both stories, Sparky dies, much to the dismay of his young owner, who proceeds to bring the pup back to life in his makeshift laboratory.

Sparky is a devoted and playful Bull Terrier whose sense of curiosity is matched only by his beloved owner, Victor. Sparky enjoys chasing after balls and being the star of Victor’s homemade movies. He exudes tons of energy and enthusiasm, which even his untimely death doesn’t diminish.

Sparky dies early on when Victor plays ball with him and he runs onto the road to get the ball and a car hits him. After Sparky is buried in the pet cemetery, Victor, grief-stricken, comes up with the idea to reanimate him after seeing a dead frog electrocuted and watches its muscles react. Victor, during the night, digs up Sparky's corpse and conducts an experiment on him and lightning strikes him. At first, it appears to fail, until Sparky wags his tail and licks Victor. Upon the realization that he has resurrected his pet, Victor and Sparky reunite.

Victor hides Sparky in the attic, but he can't keep him hidden for long and Sparky wanders outside and frightens Victor's friend Anne Chambers. She calls her dad, who confronts Victor's parents, who soon find Sparky. They agree to keep him hidden, but after rumors start spreading about them, they are forced to reveal Sparky to their neighbors. Sparky runs away from home, followed by Victor, his parents, and the neighbors. Sparky and Victor hide in a small windmill that a man accidentally sets ablaze. Victor falls through a hole and Sparky drags him out of the windmill, which collapses on the dog. As a reward for his bravery, the neighbors recharge him with their cars, and a Poodle jumps out of a car and she and Sparky presumably get together.

Victor's pet dog, Sparky, is the star of Victor's home movies. After they watch the film, Sparky gets in trouble with the neighbor, Mr. Burgermeister, who disapproves of Sparky because he once peed on his plastic flamingoes. During this time, Burgermeister's niece, Elsa, has come home to visit, and her dog Persephone befriends Sparky when Sparky loses his ball and Persephone rolls it back to him. Victor's classmate, Weird Girl, tells him that her cat Mr. Whiskers dreamed about him and that something big always happens when he dreams about someone. This hints to Sparky's later death.

Another of Victor's classmates, Edgar "E" Gore, tries to convince Victor to be his partner for the upcoming science fair, which Victor's rivals Toshiaki and Nassor want to win. When Victor refuses, Edgar unintentionally scares Sparky away. Shortly after, at breakfast, Victor's father convinces Victor to sign up for baseball, even though Victor is more interested in science. At the ball game, Sparky watches Victor play, but mistakes the first pitch and catches it for Victor, forcing Victor to tie him up to resume the game. Victor hits the ball on the third pitch which goes flying. Sparky becomes excited and breaks the leash to retrieve the ball. After picking up the ball across the street, Sparky walks back to the field until a car comes from nowhere and accidentally hits Sparky, killing him.

Victor is crushed by Sparky's death and desires to have him back. Victor soon gets the idea to bring Sparky back to life via lightning from a lesson in school and digs up Sparky's body from the pet cemetery. He stitches Sparky's body back together and adds bolts to his neck in order to absorb the electricity. He then lifts Sparky's body to the storm and absorbs the lightning. Victor lowers Sparky's body, but detects no heartbeat and believes his experiment to be a failure. Suddenly, Sparky's tail begins wagging and Sparky himself begins licking Victor, signaling he is alive to a happy Victor. The day after, Victor keeps Sparky in the attic to keep his parents from finding out.

However, Mr. Whiskers appears outside the attic window and taunts Sparky. Sparky crashes out of it and chases after him, crashing into Mr. Burgermeister's flamingos in the process. He loses Mr. Whiskers, Sparky begins to wander around town and is secretly noticed by Edgar while Sparky was digging through the school garbage. Sparky returned home to see Persephone again and rolls his ball back to her. The two try to smell each other, but a shock from Sparky's bolts accidentally shocks the two back and gives Persephone a lightning-shaped streak of white hair. By the time Victor returned home from school, he went up to the attic, Sparky followed behind and gotten charged up when Victor put cable jumpers on Sparky's neck bolts. However, Edgar then pursues Victor for how he had resurrected Sparky and blackmails him into repeating the experiment with a deceased goldfish. The same experiment is done on the goldfish as Sparky watches in fear. When the bowl is brought back down, it is revealed the fish had become invisible.

The next day, Victor's mother comes upstairs into the attic and discovers Sparky and screams. The commotion draws Victor's father upstairs as well, and in a panic, Sparky runs into a mirror and sees what he has become after death. In fear, Sparky runs off and escapes to the pet cemetery. He wanders through until he finally spots his own grave, and realizes that he was supposed to be dead. Afraid that he is now a monster, Sparky lies near his grave whimpering. Victor comes and finds him, trying to comfort Sparky and promises to bring him home. Sparky reconciles with Victor, unfortunately, as they exit the pet cemetery, Victor discovers that other kids had discovered his experiment by the graves dug up and have repeated it. Bob and Toshiaki run up to them and plead for Victor's help, as their experiments had become a turtle monster and an army of sea creatures and have gone rampant at the New Holland Fair.

While these monsters are dealt with, Sparky discovers a Were-Rat attacking Elsa and Persephone. Sparky protects them by biting it. The Were-Rat then tries to bite him but bites one of his bolts which short-circuits it to its original shriveled form. Just when the group is safe, a mutated Mr. Whiskers kidnaps Persephone prompting Elsa to go save her. Sparky tries to warn the townspeople, but they believe that Sparky had attacked Elsa. Victor tries to defend, but the townspeople proceed to chase after Sparky to the town's windmill, where Mr. Whiskers has cornered Elsa and Persephone. When the windmill is lit on fire by a torch, Victor and Sparky go in to save Elsa and Persephone. The girls land safely on the ground, but Victor is attacked by Mr. Whiskers and falls to the bottom of the windmill.

Sparky finds Victor and drags him out of the fire, but is then pulled back in by Mr. Whiskers. Inside the burning building, Sparky defends himself from the vastly stronger Mr. Whiskers. A piece of flaming debris falls from high and manages to impale Mr. Whiskers through the chest, killing him. Sparky is buried by the collapsing windmill, causing Victor to cry for Sparky. As the flames settle, Sparky's body is rescued from the debris and brought out to Victor. The townspeople collectively join jumper cables in the parking lot and hook them up to Sparky's body. They rev their engines all at once and send fresh electricity into Sparky's body. He continues to lay there, motionless. Victor, willing to accept Sparky's fate, bids him farewell and returns to his parents. Sparky slowly comes to, alive, and barks excitedly. Victor is overjoyed, and Persephone and Sparky share a brief romantic spark. 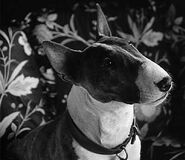 Sparky before his death 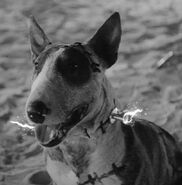 Sparky in the burning windmill

Sparky lying under the bed

Sparky in the attic

Sparky spotted Mr. Whiskers and started barking at him.

Sparky picked up the pacifier and suck on it when the baby looked at him and started to cry. 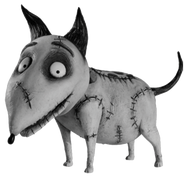 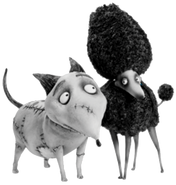 Sparky, just before his demise.

Sparky after his resurrection.

Tsum Tsum Plush
Add a photo to this gallery

Retrieved from "https://disney.fandom.com/wiki/Sparky_(Frankenweenie)?oldid=4236452"
Community content is available under CC-BY-SA unless otherwise noted.